Producing A Profit In Animation with Max Howard and Mark Simon

Do you have an idea for an animated feature or TV series?

Do you want to make BIG $$$?
How do you avoid losing your shirt in production? 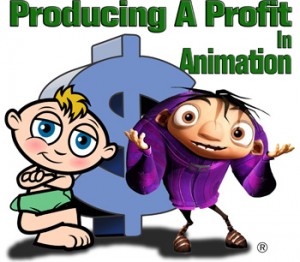 Time: When YOU want

Recorded audio presentation + web slide show. Listen to Max & Mark from the comfort of your own living room.No travel required. 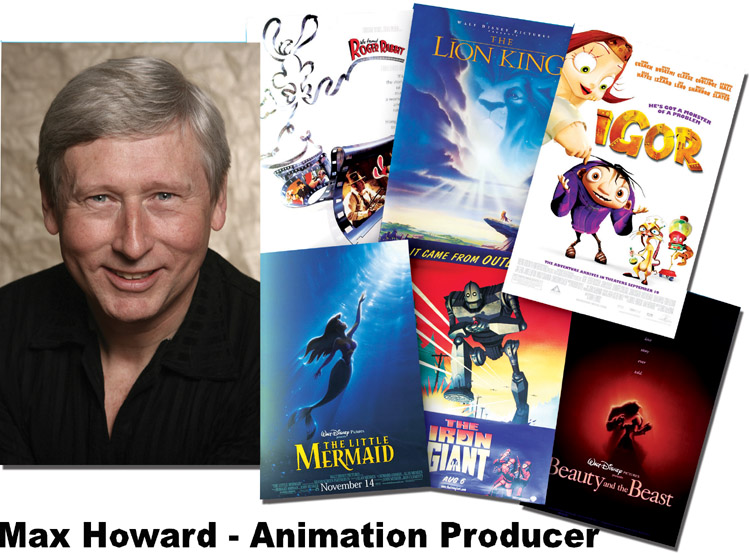 Max Howard is an (Iron) Giant in the animation business.

His movies have grossed more than $3 billion worldwide and have won 13 Oscars!
Plus, he set up two animation studios for Disney and worked with industry heavyweights like Steven Spielberg and Jeffrey Katzenberg.

Mark Simon has turned his animation addiction into a profitable passion.

His latest animation project, FOX’s Tooth Fairy 2, just came out on DVD.
He’s produced animations for Nickelodeon, Disney and others.
His animated and live-action production credits are over 4,000 and counting.
He’s won over 100 international awards including the Grand Prize in the Nicktoons Film Festival.
He’s written 10 industry books, including Producing Independent 2D Character Animation.


Max and Mark hold nothing back!

You can’t afford to miss this event!

Max and Mark answer questions that could make your own animation successful beyond your wildest dreams.

“Early in my career I was fortunate to work with Max under his studio leadership where one of the best animation teams in the industry were assembled to create Disney’s Florida feature animation studio. Max is a proven successful producer of not only major studio blockbusters, but also of cost conscience independent animated productions.”
Dom Carola
President
Premise Entertainment (Disney’s partner on Princess and the Frog) 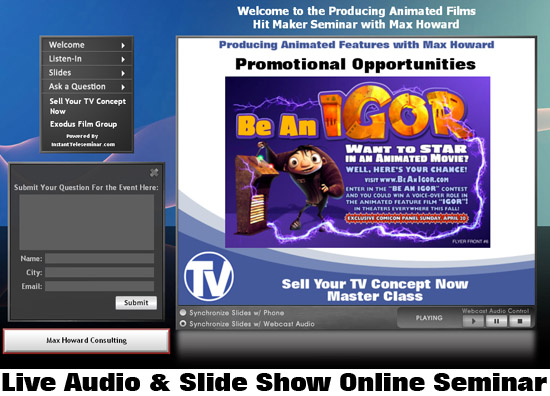 Get inspired, get psyched, hear answers from Max and Mark!

Below is your opportunity to hear more about Max and Mark’s backgrounds.

Hosted by Mark Simon, co-founder of SellYourTvConceptNow.com.
Mark has worked on over 4,000 productions, landed over 30 distribution deals (Comedy Central, Nicktoons, G4), written 10 industry books and won over 100 international awards for projects he has produced and directed.

Do I have to travel for these seminars?
No. You may attend from the comfort of your own home. All you need is an internet connection.

Will I be able to listen and watch the slide shows with my iPhone or iPad?
No. Our web streaming audio and slide show are Flash-based. Apple does not support flash on either the iPhone or the iPad yet. You will be able to access the event phone numbers and conference codes on the iPhone and iPad, but you will not be able to access the actual audio or slides shows on the devices.
What if I can’t make the seminar after I pay for it?
Don’t worry. We record every event. A recording of the audio and any applicable slide show will be available for replay immediately after the event ends.
How can I see any slide shows in your events? Do I need any special software?
No special software is needed other than the typical Flash players. However, we do not recommend signing in through AOL.com, as there are known compatibility issues.

We also recommend you use a recent version of Explorer, Firefox or Chrome web browsers.

You can download the free Flash player plugin online at http://get.adobe.com/flashplayer/.