Fall is upon us and you know what that means… leaves changing colors; Christmas music and decorations already invading retail; and the networks’ new shows flying or flopping. That’s another reason you shouldn’t miss the television conferences this Winter – the networks and other buyers are starting the hunt for worthy replacements and the next big hits all over again.

VIP client Peter Dessak is ripening from a tomato grower to a TV mogul right before our very eyes. He spent 32 years in a family business that is the largest open field tomato grower in North America, but his other ‘growing’ passion and talent has been an extremely fertile mind for creating TV show concepts – both scripted and reality. Combined with his innate business sense, some of these ideas are extremely commercial with fantastic potential.

That’s where our SellYourTVConceptNow team comes in. We’ve been working with Peter to not only shape and fine-tune his concepts to strong pitches, but also to collaborate extensively with him on developing and writing full treatments, designing their optimal visual presentation, and doing one-on-one coaching with him to target and prepare for network meetings. 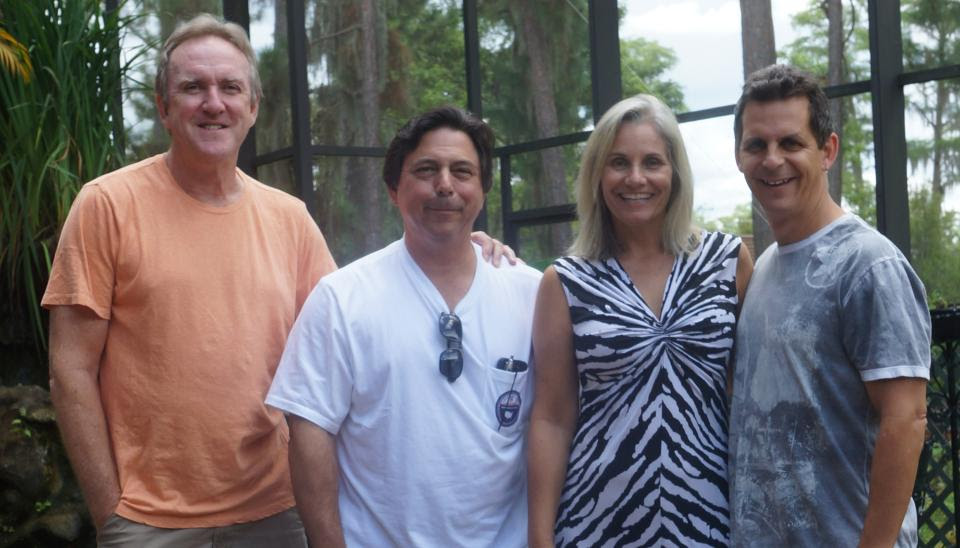 “Coming across Jeanne and Mark while looking for ways to increase my chance for success, I signed up for the HIT MAKERS SUMMIT not expecting much. My cynical self was thinking, sure I might get some useful information, and if I do great. BUT, I was also expecting to encounter a lot of fluff, along with yes men that would tell me my show idea was great, whether it was or not.

BOY, WAS I WRONG! Mark and Jeanne truly care about your success, and are not looking to just take your money. They tell it like it is, if they think something doesn’t work, they’ll let you know. On the other hand, if they do think you are on to something, they’ll take the time to hone it like a fine edged sword! Of course you have to pay for their services, but this is their business and they take it seriously.

I watched attendees get up and make a pitch of a show they created that sprang from their own mind. Some were better than others, but none were great. Then I watched Mark, in two minutes, get up and pitch their show more concisely, with so much more excitement, it blew me away! The man is truly talented. The ENTIRE team is! They can help you make your dream a reality.

Keep in mind, there are no guarantees. But if you are truly serious about making your show the best it can be, to make YOURS stand out above all others, I highly recommend talking to Mark and Jeanne!”

For more information about how you and your projects can benefit tremendously from the VIP Program, call us at 407-351-0893. 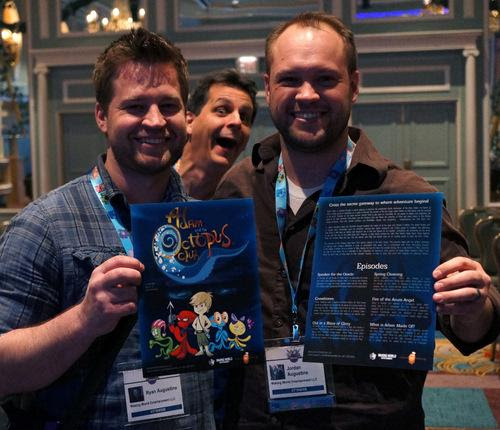 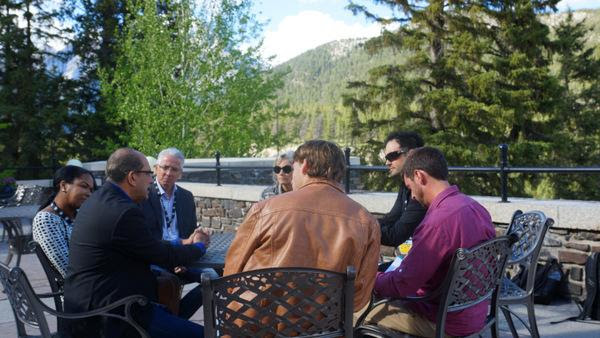 If you’re going to be pitching your show at one of the big television conferences coming up this winter (see our Upcoming Events section below), don’t forget that there are more buyers at these conferences than just the networks. And there are more opportunities for deals than what you could ever predict going in.

Just ask two of our Hit Maker Tour members, Ryan and Jordan Augustine (right), who went to Kidscreen Summit last year and made a deal for their animated show Adam and the Octopus with Breakthrough Entertainment.

Breakthrough Entertainment has already produced more than 2,200 half-hours of programming and is a leading global producer and distributor of acclaimed prime time comedy and drama series, as well as factual entertainment, documentaries, television movies, feature films, family entertainment and children’s animation. They’ve partnered with key broadcasters all over the world including Disney, Jetix, PBS, BBC, TV Brasil, M6, France 5, Discovery International and Eureka, and are one of Canada’s most prolific providers of television from their programming headquarters in Toronto.

Breakthrough Entertainment President of Distribution Nat Abraham met exclusively with our Hit Maker Tour members at both Kidscreen Summit in New York City and at Banff World Media conference in Canada this past year.

And Breakthrough is just the tip of the iceberg for other potential buyers you may encounter in today’s broadcast, cable and online content revolution.

How to Make Your Treatment a Valuable Sales Tool 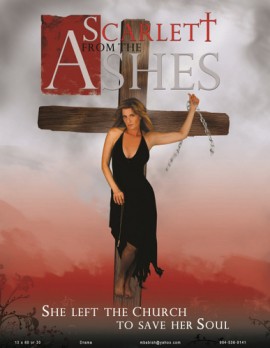 A treatment is a like a corporate business plan, only entertaining to read and visually interesting. A treatment is a sales tool between 8-35+ pages long which makes clear what the show is about and what will actually be seen on TV. This sales piece should be much shorter and simpler than a production bible.

We check out many blogs online and we’ve been shocked to read that some people think that you don’t need to create a treatment to sell your show. They couldn’t be more wrong.

3 Top Reasons Why You MUST Have a Treatment

4 Ways to Make Sure Your Treatment Sells Your Show

Realscreen brings together creators, buyers and distributors of unscripted programming for two days of panels, pitching and networking. Realscreen events provide unrivaled access to leaders in the international business of unscripted entertainment.

Here’s the site for registration:
https://summit.realscreen.com/2015/register 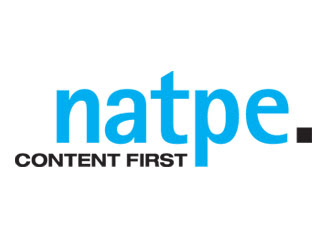 Is the conference for pitching scripted shows, sitcoms,drama and sci-fi. NATPE is committed to encouraging the growth and supporting the success of video content development, creations,production, financing and distribution across all platforms.

NATPE runs January 20-22, 2015 at the
Fontainebleau Hotel Miami Beach,
Florida and is located right on the Beach.

Here’s the site for registration: https://www.natpe.com/market/register

Kidscreen Summit is renowned as the kids’ entertainment industry’s most important annual event. Top executives attend Kidscreen Summit to take advantage of the year’s business networking and to engage in critical dialogue on issues that affect the industry. Kidscreen’s premier annual event has quickly grown into the world’s leading conference on the business of kids entertainment, hosting nearly 1,600 attendees from around the world. Top decision and deal makers attend to engage in critical dialogue, network and find new ideas that will drive their businesses forward.

Kidscreen Summit provides the year’s best opportunities to make contacts, cement new relationships and reconnect with colleagues from all areas of the business. There are several pre-events and on-site opportunities to meet current and future partners. kidscreenxchange is an interactive online tool designed to get you a jump start on your networking. Registered delegates can search and send messages to each other months in advance of the event. You can set up meetings, identify common interest and build partnerships. 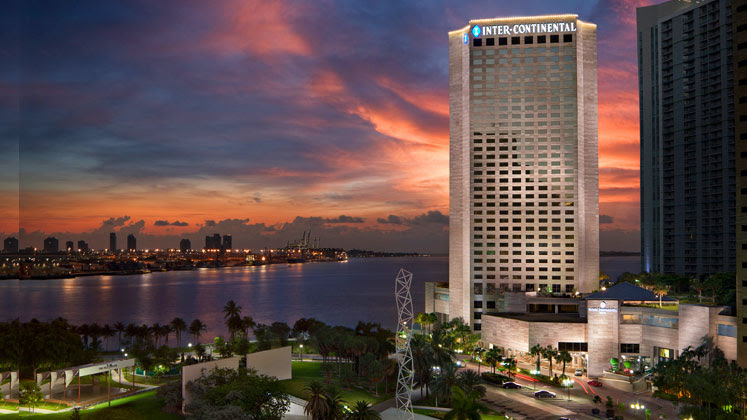 Here’s the site for registration: https://summit.kidscreen.com/2015/register/

The Pitch Perfect Program + Hit Maker Tour Package combines the most vital elements and training you need to get your project completely up to speed… PLUS includes us as your guide and mentor to a major television conference.

You will work 1-on-1 with our ace development team. Check out all the details here: tvpitchperfectplustour.com

You also get Lifetime FREE ADMISSION to any fee-based virtual workshops hosted by Sell Your TV Concept Now (and we have some fantastic ones on everything from protecting your idea, to pitching and producing animation, to selling screenplays – check the link for some past workshops).

PLUS – Any partner can participate in the program for no extra fee.

It’s the perfect one-stop package to help you get your project up to speed and out of the gates, and where you are still the creative control force behind everything. You’re just getting industry expert step-by-step guidance along the way.

We have been watching the new shows this season and will have some insights on the emerging trends and what will survive and what probably won’t in upcoming editions, but we want to use this section to highlight and promote a couple feature films we feel strongly about. 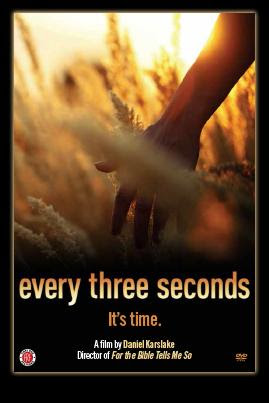 Mark and I are financial supporters of this inspiring film produced and directed by Dan Karslake. We recently saw a screening at the Global Peace Festival and it gave us hope there are solutions out there for some tough problems.

Every Three Seconds will be released on October 16th, World Food Day — an international day for the end of hunger sponsored by the United Nations.

Because the right to food is a basic human right, because hunger is solvable in our lifetime, and because the cost of neglect is too high, we wanted to share our film with the world on this important day and be part of the voice calling for change. Since Every Three Seconds is about engaging in a real and sustainable way in the end of hunger and extreme poverty, it feels like the perfect partnership!

We also recently went to a press screening of The Good Lie, followed by a Q&A with two of the actors and the writer, Margaret Nagle. Reese Witherspoon plays the main character, and yet hers is not the main story. It’s about the Sudanese war and four refugees who came to the U.S. in 2001. A film like this is a tough sell in Hollywood and it took Nagle eleven years from inception to production, but it’s a triumph to have the film now finished and with a major star aboard to promote it. The movie was released Oct. 3rd. Check it out; it’s a treasure.

GRIN AND GRILL IT

The long hot summer should never end without putting a big laughter exclamation point on the end of it, so what better way than to host a barbecue for all our local friends in the Florida chapter of the National Cartoonist Society? 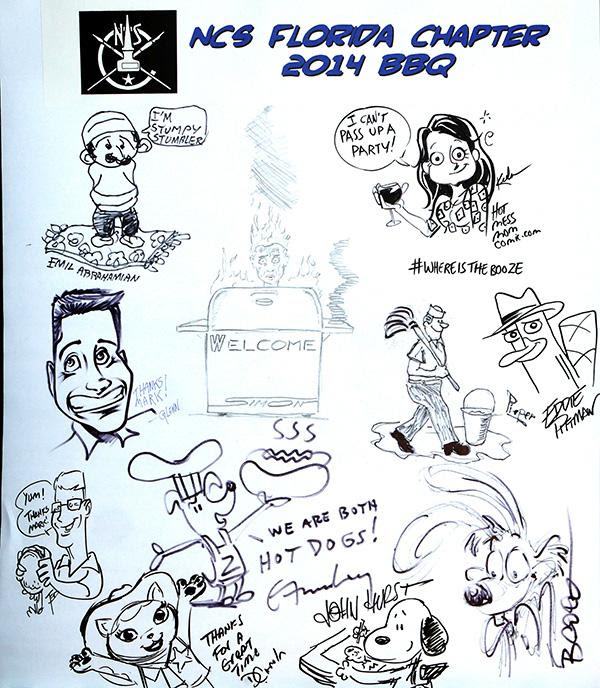 The NCS is a great group of comic strip and comic book cartoonists, animators, caricature artists, illustrators and goofy-ass people. In attendance were Chapter Chair Eddie Pittman (writer/story artist on Phineas and Ferb), Dom Carolla (Disney producer/animator), Barry Cook (director of Disney’s Mulan and Sony’s Arthur Christmas), John Hurst (story artist on the new Peanuts film and Ice Age 3, 4 and 5), and many others.

The artists also signed and sketched their doodles on a commemorative poster for the occasion. We just eat up stuff like this.There’s nothing like a group of creatives getting together to share stories and make each other laugh. 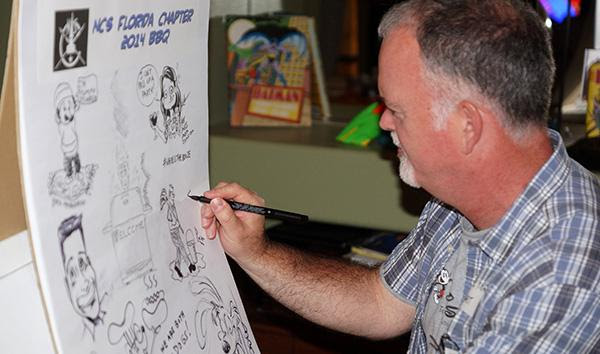 Summer may be over, but the grins and good time feelings will linger on. We hope your summer ended with a big smile, as well.

Time to charge forward into Fall. Make it count!