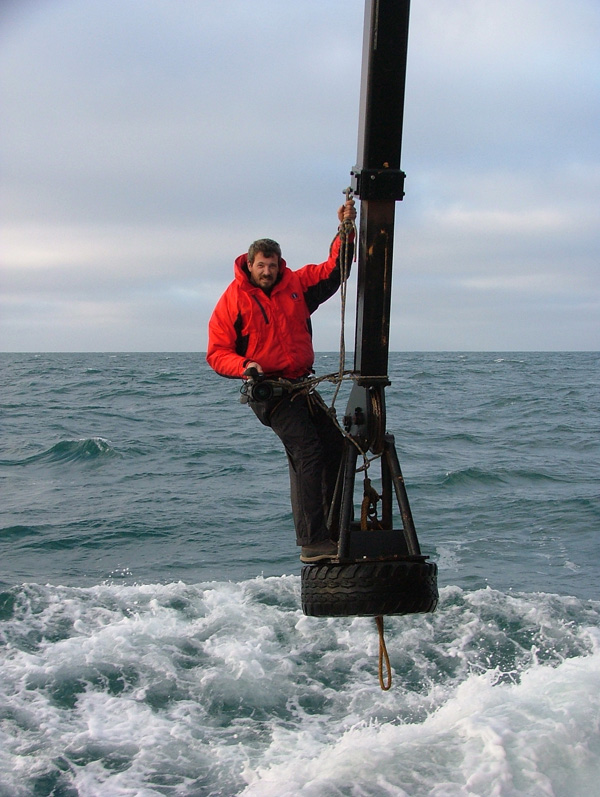 Doug Stanley, our good friend, client, and the Emmy-award-winning producer of Discovery’s hugely popular Deadliest Catchgave us all some real insights into what it takes to make riveting reality television in the virtual workshop, “Reality TV Revelations,” last week. We hope all those who attended were thoroughly entertained by his awesome and harrowing stories, and were also inspired to fearlessly launch their own reality projects.
If missed it, it’s not too late to get the reality show treatment template, the full 2+ hour audio recording of the virtual workshop and the slide show. The cost is just $65 and the replay is yours forever. Click below to make your purchase:
https://www.sellyourtvconceptnow.com/realityTVrevelations.html

Here’s one question we didn’t have a chance to get to in the workshop, but will be of value to anyone creating a reality show:

“In the interest of being original, does a directory/list of past and present reality shows exist.”
– Lee from Phoenix, AZ.

Mark can take this one…

“The answer is… yes; there are both free and paid resources forMark Simonresearching TV shows. Let’s talk about a few of the free ones.

A list of the major new shows of 2013 can be found at the Hollywood Reporter:http://www.hollywoodreporter.com/live-feed/tv-pilots-2013-complete-guide-413377

We also often refer to TV.com to research past and present shows. You can search by category, decade or network.

Of course, the best and most fun resource is to simply watch TV. Lots of TV. Tons of TV. We hear from some creators who say they don’t watch TV. If that’s the case, then don’t create a TV show. You need to watch TV if you want to work in TV. Period.“ 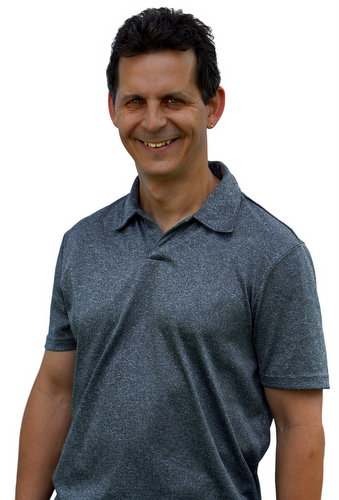 The Winter television conferences are coming. We shouldn’t have to remind you what that means. It’s prime season for pitching your shows, and the networks and cable stations are at these conferences LISTENING.

For any kind of non-fiction show including game shows, documentaries, and competition shows…
Your best bet is the Realscreen Summit in Washington, D.C. running January 26-29.

Besides being a great time to take advantage of our exclusive discount on registration, it’s also smart to get a head start on making your travel plans. And once you know you’re going, you’ll want to think about joining our Hit Maker Tour group, where we mentor you directly on site to get the most out of the experience. Sharpen your pitch, and help you make more network contacts than you ever thought possible. Strategize who and where to pitch and how to follow up. We’re there to help you do it all.

For scripted dramas, sitcoms, and sci-fi…

Your best bet is NATPE Market and Conference, National Association of Television Programming Executives, in Miami Beach, Florida, running January 27-29. Besides a spectacular setting at the iconic Fountainbleau Miami Beach Resort, this event attracts plenty of movers and shakers, and not just the ones speaking at events, or officially on hand on the convention room floor. One of or Hit Maker Tour members scored an agent and meetings in L.A. for her show by working the events and making more than 400 personal contacts.

Both Mark and Jeanne will be attending Kidscreen this year, so this is an optimum chance to take advantage of that Hit Maker Tour and get TWO mentors for the price of one at the conference to help you market your show.

What is the Hit Maker Tour?
“It’s the heart and soul of our business. It’s getting you in front of network executives and pitching with absolute confidence.”
– Jeanne Simon
The Hit Maker Tourprovides pre-conference material reviews and pitch practice, and on-site mentors to make sure you get the most out of your conference investment. 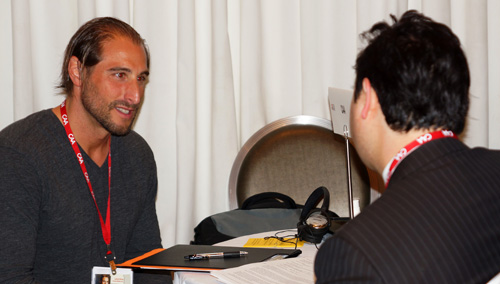 The summer scare flick “You’re Next” that used Mark’s animatics for production did very good business and Mark just got some exciting news from Lionsgate about the upcoming DVD release. Extras on the DVD will include interview segments with Mark, as well as some of the animatics he created for the action sequences. There may even be a next “You’re Next,” so stay tuned.
Mark has been tapped to try out the latest greatest tablet from Wacom, which will ultimately retail for $2,500 and provide full Windows 8 PC capability, processing and storage in a tablet format. Mark thinks this will be ideal for storyboarding while traveling, and will be anxious to share the results of his experience working with the new device.
Jeanne SimonJeanne’s just back from Phoenix after a three-day intensive training with marketing mentor David Neagle. Again, these are strategies, motivations and inspirations that ultimately all our clients will be able to utilize to better position and promote their own projects for maximum appeal. She’ll be excited to share the latest trends and techniques.

The prime benefactors of these new strategies will no doubt be the members of our Accelerate Program, who have the most access to hands-on training in the full development and marketing process for their shows. 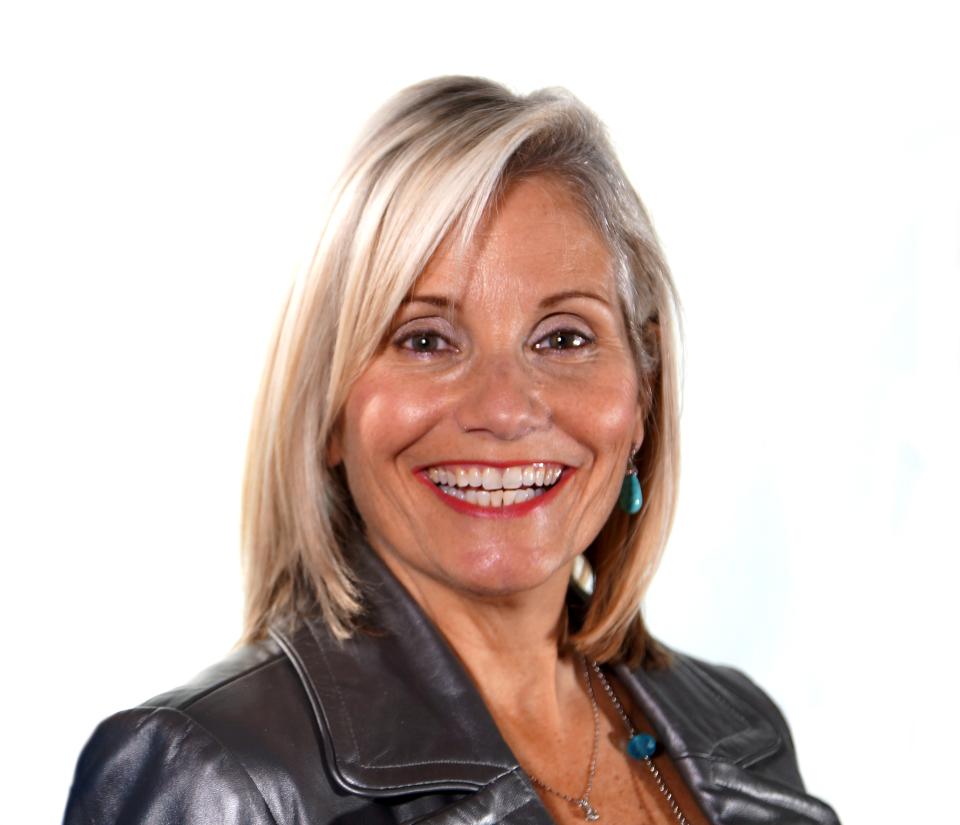 Training sessions have already focused on genres of shows, how to prepare an overview, character development, executive producer functions, and material reviews.

Every training session is replay-able to members, so if you have been considering joining the Accelerate Program, you won’t miss anything vital. But the sooner you get aboard, the more live action give-and-take sessions and participation you can enjoy. These jam sessions are also invaluable for collective brainstorming enhancements to your show.

We are approaching a crucial marketing opportunity with the big winter television conferences approaching, so there is no better time to fully and finally develop your show to make the best impression possible, and to finally sell that idea.
Find out more about the Accelerate Program here:
https://www.sellyourtvconceptnow.com/accelerate/

Mark is busy producing and directing a music video for a new rock band. We’ll have some images from that production in the next newsletter.

Wayne is busy scripting a contemporary noir thriller feature screenplay with novelist Kristin Alexandre called “Altar Rock.” As part of the process, Kristin is getting a master class in screenwriting to co-write this project through use of live Skype sessions with Wayne, where they spent more than 15 hours breaking the story into a scene-by-scene outline. She also is getting hands on instruction on how to use the screenwriting software Final Draft to exchange drafts back and forth, as well as invaluable tips on how to customize dialogue for the voice of each character.

It’s a remarkable new world for how writers can collaborate from different locations using modern technology, and Kristin will be able improve her screenwriting skills much faster with these techniques added to the input from the 25+ years Wayne took to master his craft. Potential screenwriters and TV pilot writers take note!

Also, here’s a link to his “Sell Your Script” webinar replay:
https://www.sellyourtvconceptnow.com/sell-your-script 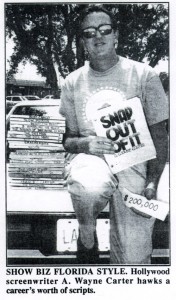 Did you know there are certain dominate words in the popular titles of shows in the top 30 cable networks? Much as how Search Engine Optimization (SEO) works using particular words to maximize Internet traffic to a particular site, industry research has been used to determine the words with the most wow for memory or impact in a television title.
This information is just one of the insider tidbits in Nicola Lees’ book Greenlit: Developing Factual / Reality TV Ideas from Concept to Pitch.
The list includes 30 words, so we’ll share the first 15 this month and the next 15 in the November newsletter. Here are the first 15:
PARANORMAL
EXTRAORDINARY
FREAKY
OUTRAGEOUS
KILLING FUNNIEST
EXTREME
MONSTERS
BUSTERS
RAW
UNTAMED
GRIZZLY
UNCUT
DEADLIEST
PREY 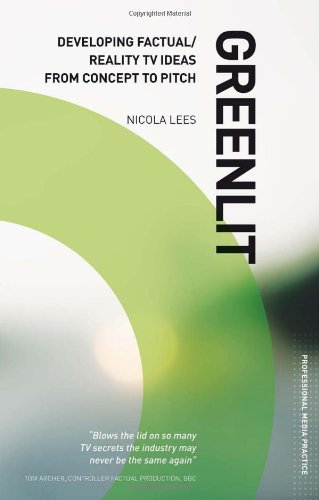 This gives you some interesting insight into the direction and thinking behind what the cable networks are looking for when choosing a show and how to present it. Does your show contain any of these words in combination with other words of your own choosing? Just something to think about in our age of precise and premeditated neurolinguistics.

Breaking Bad ended it’s five-season run and what a phenomenon the excitement for the finale grew into. Bars and clubs even had viewing parties (we haven’t seen that since Twin Peaks), and we doubt many fans didn’t watch it live instead of on DVR or Netflix for once (10.3 million according to AMC).

The show’s creator, Vince Gilligan, wrote and directed the final episode and (SPOILER ALERT) pretty much left no meth pipe unsmoked. Everyone got their just desserts, and we’ll never casually load a packet of Stevia into our Chamomile tea again. This is basically how you do a finale to satisfy long-term fans. Powerful. Poignant. Poetic. Plus, a lot of nasty Nazi’s got mowed down from an M-60 in the trunk of a car. Jesse strangling Todd had us cheering. And Walt bleeding out to and beneath his “Baby Blue” had us crying – not for wicked Walt – but for a sad farewell to one of the best and most cinematic narratives television has ever produced.

Meanwhile, on Showtime, Dexter ended after eight seasons with a whimper instead of a bang. We get that (SPOILER ALERT) they probably couldn’t kill off the serial-killer title character since he continues to live and slice away in the book series the show was originally based on. But to leave him as a loner, brooding, self-exiled lumberjack (and he’s alright!) in Washington state? When did this show suddenly turn into a Monty Python sketch? Still, this show jumped the blood splatter slide long ago, after John Lithgow’s villainous triumph as the Trinity killer in season four.

Marvel’s Agents of S.H.I.E.L.D is the fast paced, clever, quirky and fun experience you’d expect a Joss Whedon project (Firefly,Buffy the Vampire Slayer, Avengers movie) to present. Wayne’s only quibble is that the characters this time look a bit too cookie cutter along the typical TV trend of generic looking, model-type men and women.

With the exception of Clark Gregg as agent Coulson and Ron Glass, they all look like they came out of a fashion catalog, and, so far, their characters have very little distinction or depth beyond that. We trust Whedon to flesh them out more, but there is just very little diversity in their overall look, age, size, manner or appearance to the point where they are almost interchangeable, pretty action figures. Maybe that’s the point. Visit your local Toys ‘R Us for Christmas gift ideas for your little agent!

Check out this animation progress video for the pilot episode of “Cyber Optics” that Mark directed. This gives you a fascinating glimpse into the various stages of development behind what you ultimately see on the screen in an animation TV show
Ever wonder what a day in the life of a Storyboard Artist is like?
Wonder no more, here’s the scoop:

WHERE ARE MARK AND JEANNE (and LUKE & REECE)? 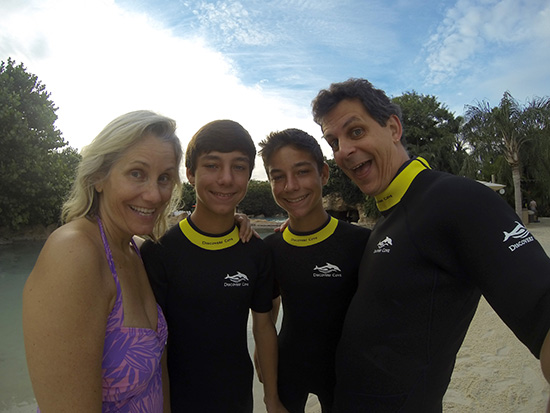 Their shoes may be 13, but Luke and Reece have officially turned 14. And, to celebrate, based on their love of all things fishy, they went communing with the dolphins at Discovery Cove, careening down the water slides at Aquatica, and consuming beneath the shark tank at Sea World’s immersive signature restaurant, Shark Grille. A great time was had by all (and a Zombie Apocalypse birthday theme event would have been a lot more complicated to deliver). 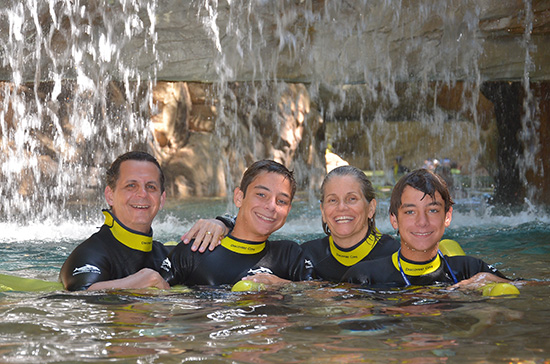 Mark, Luke, Jeanne and Reece soak it all in at Discovery Cove