This might be July, but a lot of fireworks already blasted off last month when our Hit Maker Tour members sparked interest from television execs at both June conferences. Check out our Realscreen West and Banff highlights sections below for more dazzling details.

And light a fuse under yourself to join our Hit Maker Summit in September to prepare your show idea for the next round of opportunities.

Guess who we ran into at Realscreen West this past month? 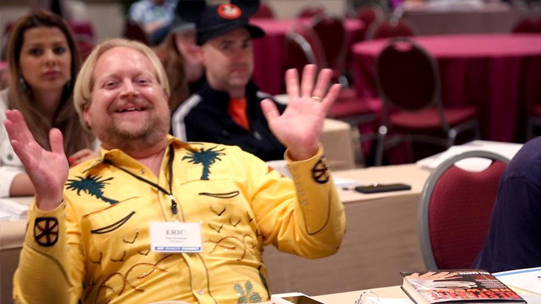 Jeremy Thorpe, Eric (pictured above) and Heather Newland were at our Hit Maker Summit last year developing a show about Jeremy’s oddball team of workers and clients at his Mini Cooper business in Oregon.

At the Summit, they joined our Pitch Perfect + Hit Maker Tour Package to pitch the show the following January at Realscreen Summit in Washington, D.C – the largest TV conference for reality shows in America.

On the way to the conference, Jeremy and Eric ran into Todd Hoffman and promptly wheeled out the pitch package and pitch they had perfected with our team.

Hoffman was not only intrigued, but excited enough to come aboard as an acting Exec Producer to help promote and sell this modern day David & Goliath auto story.

That’s how you work it, folks! Once you have that pitch down, you are totally positioned to take advantage of golden opportunities such as this one. We’ll keep you posted on where “Monster Mini” ends up on your television guide. 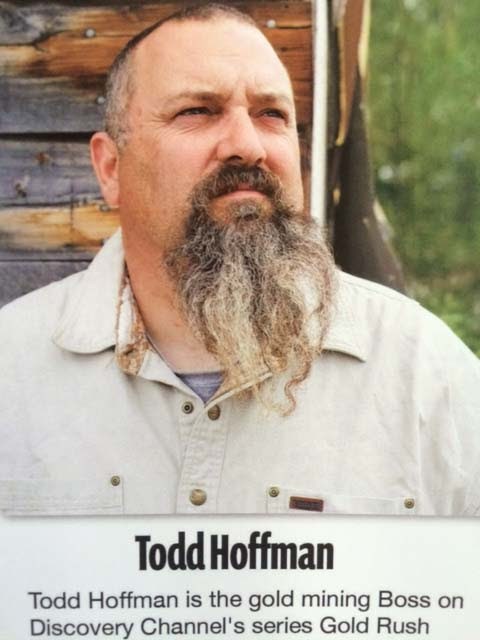 But that’s not the only client with some great news we ran into at the conferences. Nathan Heinze was also at our Hit Maker Summit and
Mark ran into him at Banff, where he revealed that, from the contacts he made at Kidscreen, he now has a gig writing on a Disney series. 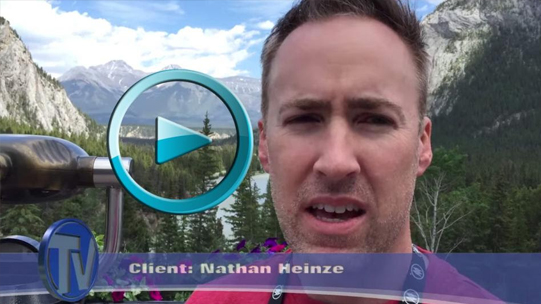 Awesome! Talent will win out… if you get out there and promote yourself as well as your show to the producers and execs who can make your wildest dreams a reality.

Realscreen West was held June 1-3 in Santa Monica, California and our Hit Maker Tour members were primed for some great and exclusive private meetings with television execs, as well as some terrific unscheduled networking opportunities. Let’s take a look. 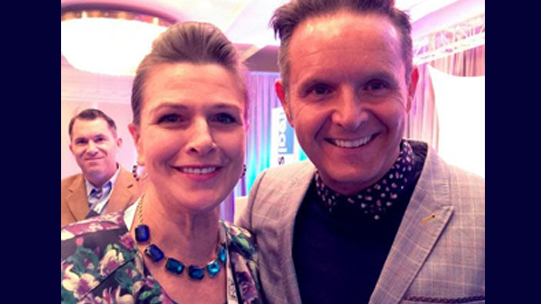 Nothing will get you more inspired at the potential of your own reality series than meeting the king of reality programming, Mark Burnett, responsible for such shows as Survivor, The Voice, Are You Smarter than a 5th Grader?, and Celebrity Apprentice.

Hit Maker Tour member Deirdre Wagner shared a big smile with Mark, as well as, her pitch on a show about people like herself who have overcome physical tragedies. 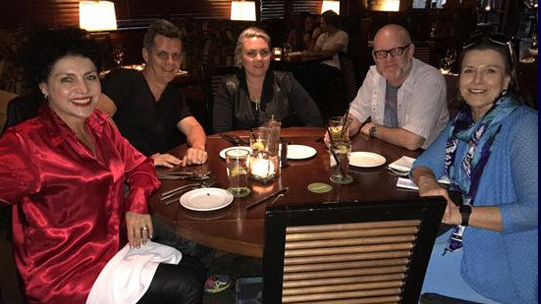 Our exclusive closed door dinner for Tour members prior to the conference included executive Amberlee Mucha (center) from Discovery Studios and Steven Brody (white shirt), currently a story producer on the CNN reality show, “Somebody’s Gotta Do It” with Mike Rowe. Everyone was surprised to learn Mark first met Brody when they went to high school together. 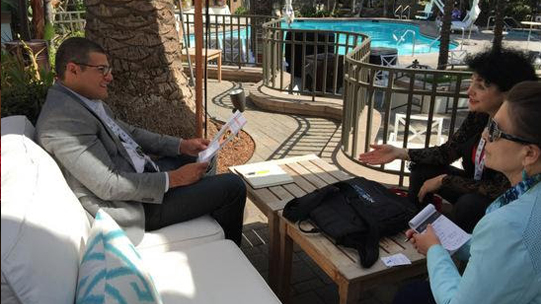 Hit Maker Tour member Deirdre Wagner shared a big smile with Mark, as well as, her pitch on a show about people like herself who have overcome physical tragedies. 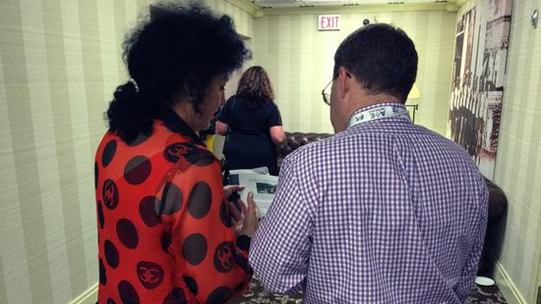 Even when you don’t have an exclusive meeting set up on the HMT, there are prime opportunities you just have to grab. When Mark saw an exec from the Travel Channel (Doug Bailey, Director of Production and Development) after he had just left the room from a speed pitch session, he grabbed Lillian and pointed him out and literally pushed her over to meet him. Travel is a perfect fit for her show and she now has a follow up with the channel. 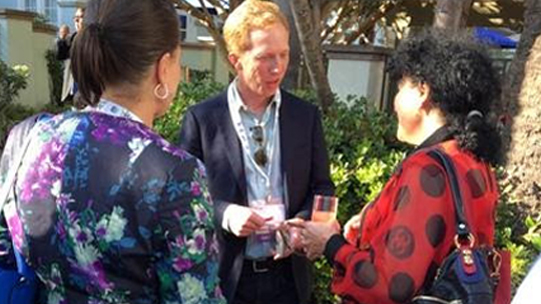 The big push wasn’t done when Mark also recognized an executive from Lifetime at a cocktail pool party. He grabbed Deirdre and Lillian and pulled them over just as the exec was finishing a conversation. Lifetime would be the ideal channel for both their positive reality shows. Sometimes you just need a little push. 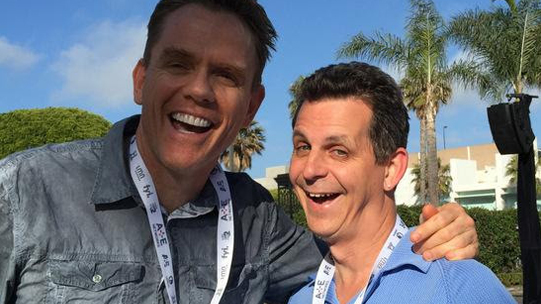 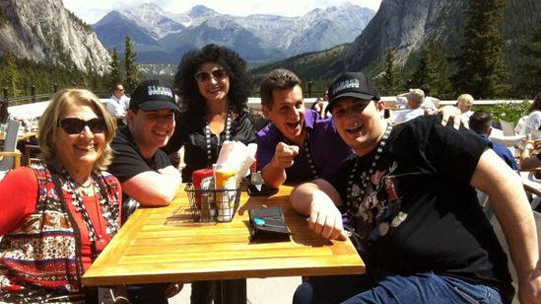 The Banff World Media Festival for all types of shows was held June 7-10 in Banff, Canada. When you have an intimate group lunch here, your lobby view is the spectacular Canadian Rockies. 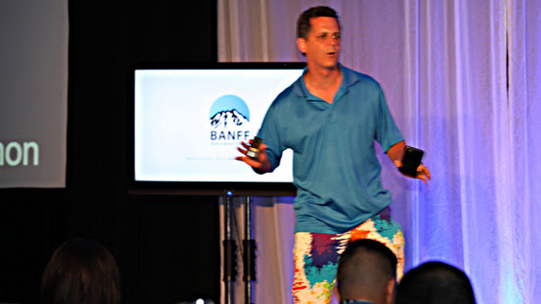 Mark gave the opening talk at the festival which was, appropriately enough, “Perfect Your Pitch in 10 Minutes.” No doubt the capacity crowd at his talk listened carefully and applied those tips liberally over the next three days. 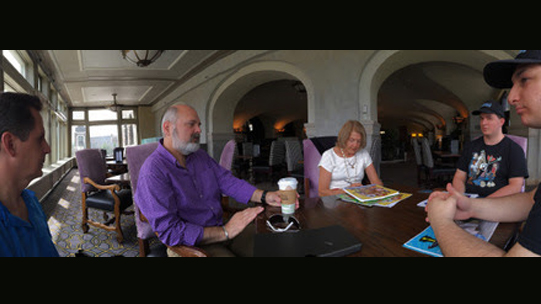 Zodiak Kids is a huge preschool entertainment company for kids’ series based out of London. Michael Carrington (purple shirt below) is the former Vice President of Global Content and now current CEO of the Zodiak-owned production company The Foundation. His very first meeting of the conference was a private session with our Tour members who were pitching kids shows. 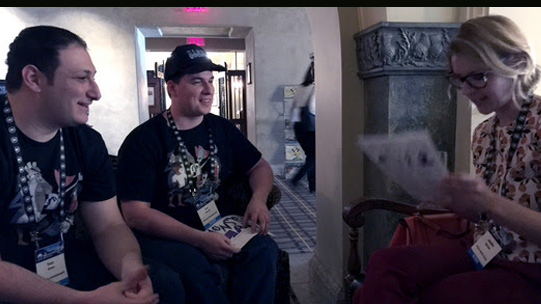 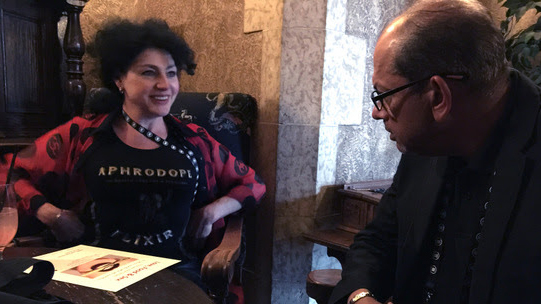 Nat Abraham (right), president of Breakthrough Entertainment, was positively giddy over Lillian Zeltser’s show about the history and use of aphrodisiacs called “Love, Food & Sex.” Maybe it was the vial of Aphrodope she provided him; a product she and her husband market out of Australia.

In any event, her pitch at this exclusive meeting caught his attention and she’s currently talking to his team. “I’ve never seen a show about this subject before,” Abraham commented. Always a good (and rare) sign. 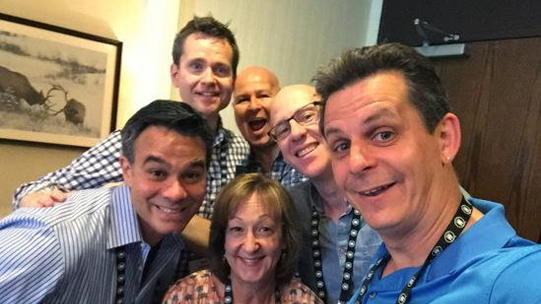 Shaw Media is a another huge entertainment group that operates Global Television and 19 of the country’s most popular specialty programs. They also have a mentoring group that trains seasoned writers how to become show runners of successful series. Mark was part of that group for this conference.

We can’t leave Banff without one more shot of some Tour members enjoying the awesome scenery. Nothing invigorates a pitch like some fresh Canadian Rockies air, and some good bites from execs to follow up on. Stay tuned!

“WHAT NETWORKS WANT – Part 2” in August

How to Register and Enter the Giveaway: 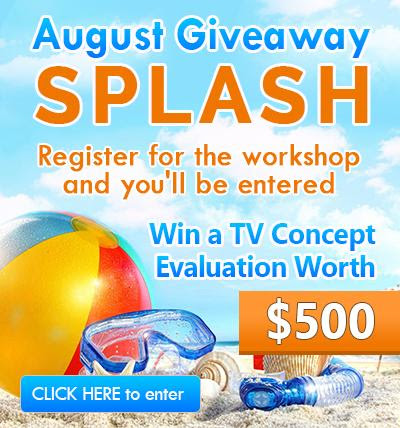 Click on the image below or copy and paste this link in your browser:
www.sellyourtvconceptnow.com/whatnetworkswant
In case you missed it, we hosted Part 1 of a two part free virtual workshop series called “What Networks Want” last month.

Part 1 covered what networks want in show content and in Part 2 we’ll focus on what execs want in a pitch.

This information is too important to miss, so we’re providing you with a link for a free replay of this event. Feel free to pass the link on to others who are struggling with their TV show ideas.

Just click on the link below to take you to the free replay of Part 1.

It’s not too late to sign up for Part 2 happening on August 18th and enter the August Giveaway Splash for a TV Concept Evaluation worth $500.

In Part 2 we’ll focus on what execs want in a pitch, so you khow to prepare your pitch for maximum success. 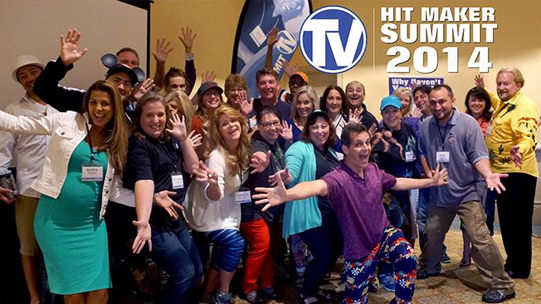 Nothing but raves! That’s all we hear from former attendees, many of whom have gone on to nail deals after their training at the Summit.

“The Summit is absolutely, positively worth the cost. What we learned these three days can be worth millions of dollars. If you want to be a player in the industry, you need to be at this Summit. The guest speakers have actually lived it and breathed it and are giving their real experiences of how to pitch your show. Come to the Summit and learn how to do it right because other people have spent hundreds of thousands of dollars never getting it right. We love you, baby we love you!”
-Mike Lane- New Orleans, La

You got a taste of how the Hit Maker Summit can prepare you and your show for important pitch meetings, as well as, the major television conferences coming up, so now is the time to register for this amazing experience and plan your September calendar now.
Reserve your spot on or before July 17th and SAVE $1,000 with our Early Bird discount.
Hit Maker Summit 2015 runs September 19-21 at the Hilton Orlando (Destination Parkway). Whether you are a seasoned commercial production company wanting to get into pitching show ideas, or simply a writer or person with an idea you may have begun developing that you think will fly, this Summit will satisfy your insider information needs, pitch prep, and exceed your expectations. 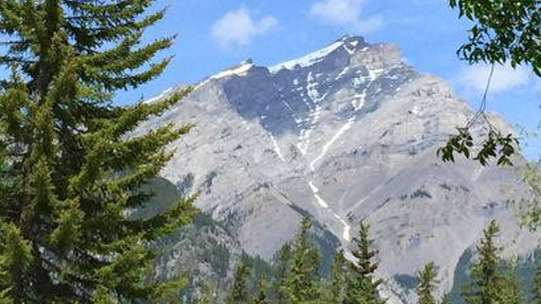 Who says you can’t multi-task at one of the most scenic settings in North America, while also mentoring and pitching at a major television conference?

Mark spent a day before the opening of the Banff conference and our Hit Maker Tour directing voiceover talent in New York for the animation pilot “The Curious Adventures of Willow B. Star” from his hotel room in Banff via Skype all day. Now that’s a great use of modern technology combined with visual splendor. 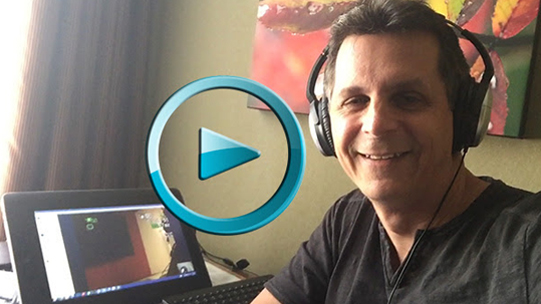 Click on the image above to take you to a brief video to see how that’s done.