It’s that time of year again when the Winter TV conferences are in full swing, so we’re cutting to the chase and presenting our photo journey Special Edition of highlights from the Realscreen Summit in Washington, D.C. and NATPE in Miami Beach, Florida.

From the frontlines at REALSCREEN SUMMIT

The Realscreen Summit television conference was held in Washington, D.C. from January 26-29 and featured buyers of reality television show programming. Jeanne was at the conference with SYTVCN clients to coach them on their pitches, guide them to target execs, and strategize how to sell their shows.

“Realscreen was the biggest and best yet! There were nearly 3,000 attendees and the new venue, Washington Hilton, was big enough to accommodate all of the action. The Hit Maker Tour members to Realscreen killed it this year and made the most of every second they were at the conference. Stay tuned to our client spotlights in future newsletters because you’ll definitely see several of the smiling faces below profiled when they finalize their deals.”
– Jeanne Simon 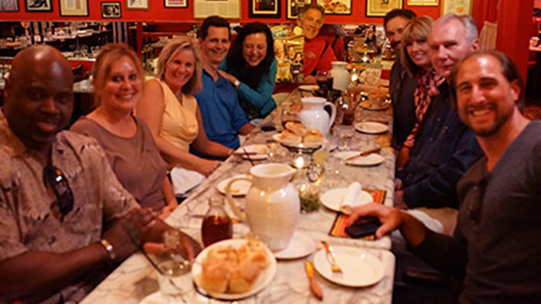 Here’s our Realscreen Summit 2014 Hit Maker Tour members pumped up with anticipation and ready for their closed door session prior to the conference, where they had a chance to practice their pitches with network execs and seasoned producers. Talk about the perfect appetizer! 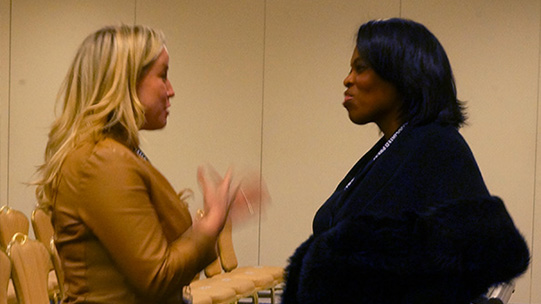 Elizabeth also had a fantastic meeting with Mary Donahue, Senior Vice President, Non-Fiction Programming for Lifetime. “I’m definitely most excited about Lifetime because of the connection I made with Mary Donahue,” Elizabeth enthused, ” And I got to spend 20 minutes with her. I didn’t expect her to be so inviting and receptive and inquisitive. There was an immediate connection. Something she was looking for was right in front of her. She told me we may be her next ‘Dynasty.’ She said ‘I want to work with you.’ And she said ‘I’ll get back to your quickly.'” Stay tuned. 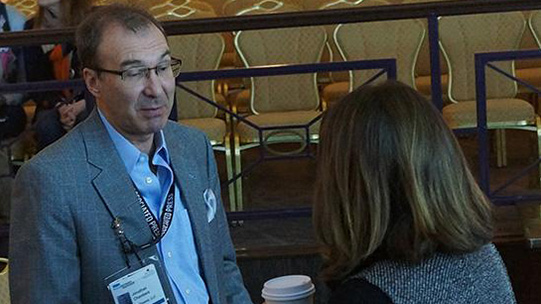 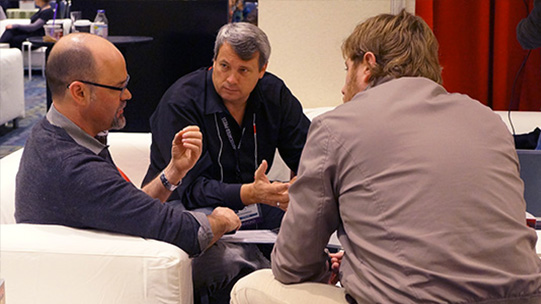 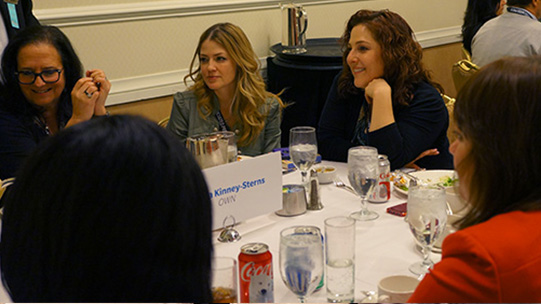 Juliana Dever and Rachel Cohen chat up an executive from OWN at lunch about their show Getaway Girls. 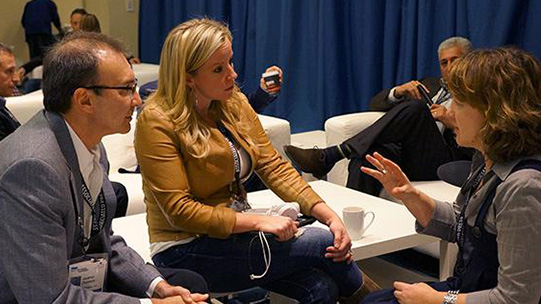 Elizabeth and Jonathan pitch their show in the delegates lounge to Diane Best, executive producer from TruTV. 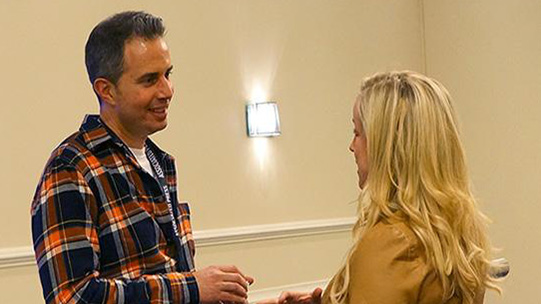 Elizabeth was definitely working it. Here she is grabbing a few precious pitch moments with Joe Livecchi, SVP, Development for CMT. 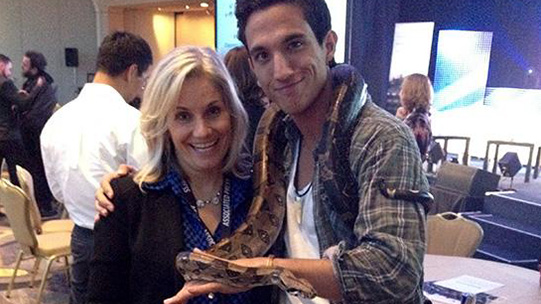 Meanwhile, Jeanne gets stuck with a snake. Fortunately, it’s in the hands of this dashing young talent, who was featured in the winning pitch of the So You Think You Can Pitch contest. Their show is about a family who goes to the most remote places on Earth to track down and document endangered species to raise awareness for their preservation. And, yes, that includes some snakes, too. 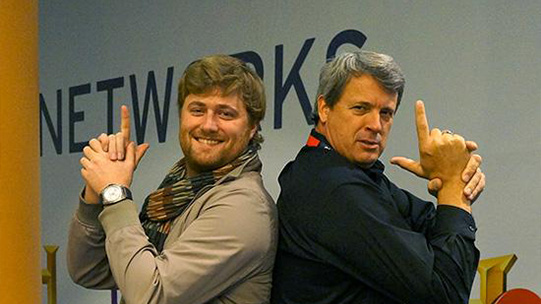 Doug Stanley is familiar with plenty of crabs from his Deadliest Catch days, but not so much snakes. Here, Filippo and Doug suggest their reaction if they ever encounter a deadly snake. Either that or they are practicing their audition poses for when Daniel Craig eventually relinquishes his role as Bond… James Bond. 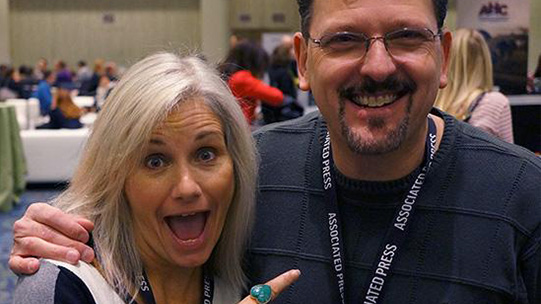 Jeanne is somewhat gobsmacked (that’s like very impressed – check your dictionary) that HMT member Len Brown took three separate show ideas to Realscreen Summit and got serious interest for two of them, including Engineering Tragedy. 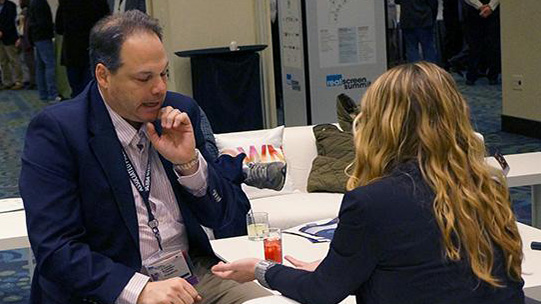 HMT member Tom Bresadola (left) also got serious interest for his show Mind Traveler, to the extent where he has a high level meeting scheduled in New York City in two weeks. He reads a palm here in the delegates lounge, but we’re also wondering if he used a little mind control during his pitch. We’ll keep you posted on the outcome, if he hasn’t already predicted a smashing success. 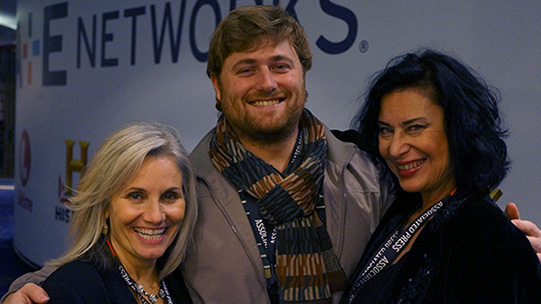 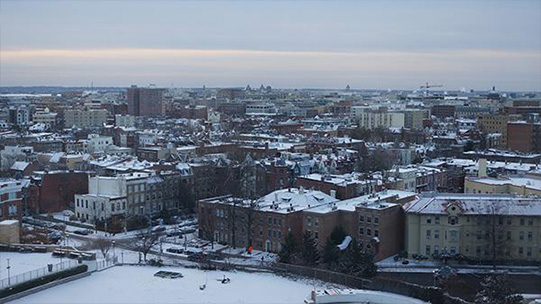 One thing HMT members and just about everyone else at RSS could resist… was going outside. It was a numbing 9 degrees and snowing in the nation’s capitol. But that didn’t stop anyone, including our group, from having a fantastically successful time inside. We look forward to all the great follow ups and developments that bloomed while the tundra winds and snow blanketed outside.

The 2014 NATPE television conference was held at the Fountainbleau Resort in Miami Beach from January 27-29 and featured buyers of all types of television shows and formats. Mark was on hand to mentor SYTVCN clients, pitch shows and get the pulse of what the market is looking for. Here’s a look: 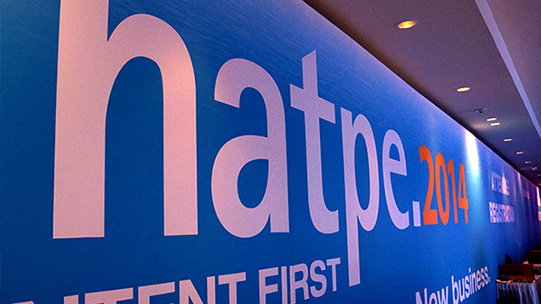 First rule of NATPE: Be as conspicuous as possible. 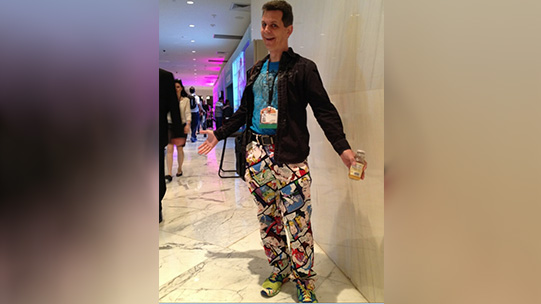 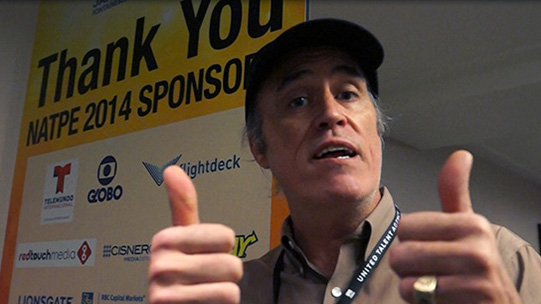 Second… catch up with clients and former clients…
“Mark and Jeanne helped me get where we are today with our project the ‘Rusty Bucket Kids.’ If YOU are going to be in the television business, you need to reach out and talk to them. They’re rockin’. ‘Epic’ is the word I use. Go get ‘em.” 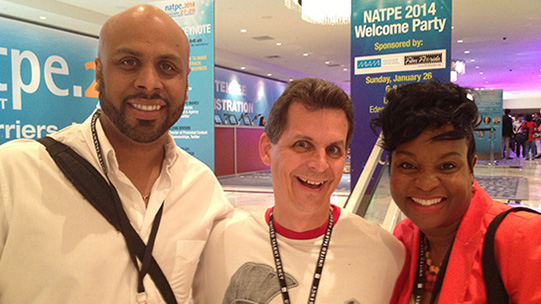 Charla Young was the winner of NATPE’s Pitchcon contest last summer in Los Angeles and also a client.
“When I met (Mark) about six or seven months ago, we were only in one market. And because of you and the work that you’ve done and all of the ways you connected us, we are now in 20 markets and growing. Your company is amazing and has just really connected with NATPE and all of these things to make us be EXPLOSIVE, baby.” 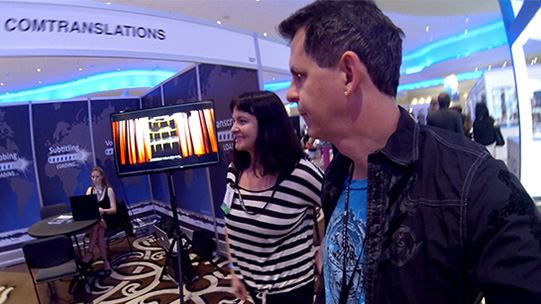 Kristin Fairfield is a member of the current NATPE Hit Maker Tour pitching a scripted show.”
“I’m here at NATPE for the first time thanks to Mark and Jeanne. They’re fantastic coaches, I couldn’t have done it without them. And, I’m having the best experience – thank you!” 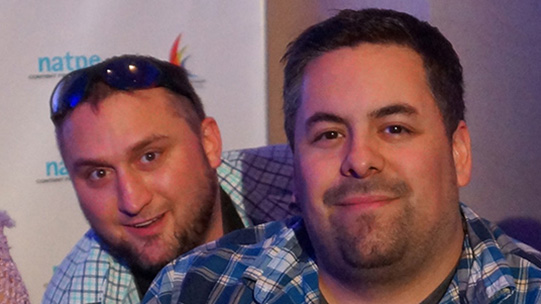 Long-time client and all-time friend John Bujak had some remarkable success at NATPE with his puppet video series S.O.A.P. and other projects.

Here’s his first-hand report: “Yesterday was good, people! Here’s the recap: we were offered a distribution deal on our show ‘S.O.A.P.,’ and we were offered a barter deal for our show, ‘Tails,’ which allows us to get into 27 markets immediately, including New York, Los Angeles, Dallas, Houston, Nashville and more! And out of nowhere as we were leaving for the night we met two women who are working alongside the United Nations producing a program that empowers Children and we sold them our fun little short called ‘Superman Begins’…all in all a pretty good day! Today I meet with Adult Swim, Turner, and Comedy Central. Oh, and met the head of Distribution of Yahoo. Derly and I drank with him for about an hour and he LOVES puppets and he also has a puppet show and wants to have us design his puppets.”
– John Bujak, John Derly, S.O.A.P. (live action puppet series) 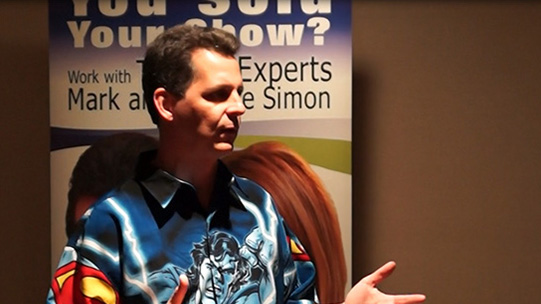 Third… give a talk on “How to Make the Most of the Contacts You Made at NATPE” as one of the event speakers. 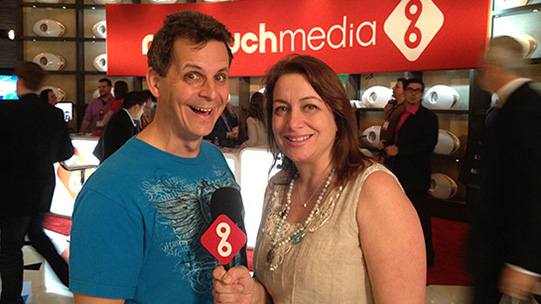 Fourth, get interviewed for the Live It Up television series by host, Donna Drake. 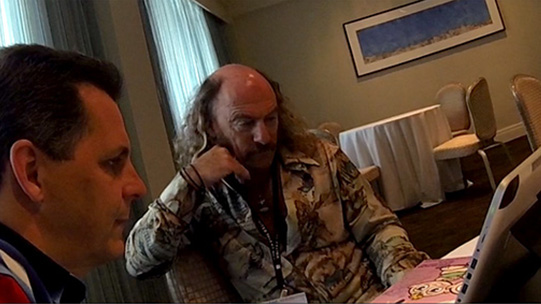 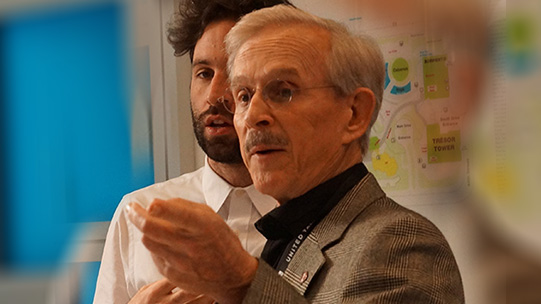 Six… meet some celebrities. Dick Smothers of Smothers Brothers fame was here to pitch a short-form roll-in news series he is producing called, A Minute with Dickie. Mark actually had a few minutes with the Dickie, commenting “You look fuckin’ fantastic,” which is always a good way to warm up an 80 year-old legendary performer. 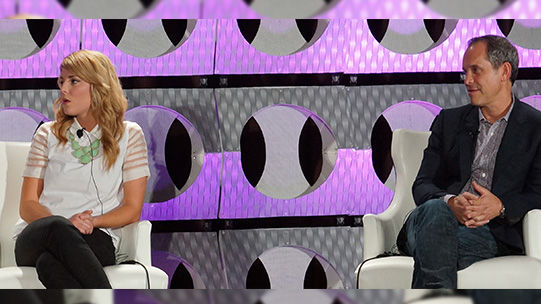 Seven… Attend some great panel discussions. Here, producer Grace Helbig, who logged over a million subscribers to her YouTube channel It’s Grace in a mere two weeks, and producer Brian Robbins, former writer-producer of Smallville and Nickelodeon’s All That and creator of YouTube channel AwesomenessTV, discuss how to build and keep viewers online through branding. 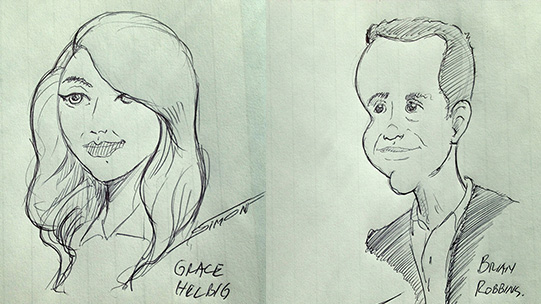 Eight… get in some sketch practice while attending a great panel discussion. 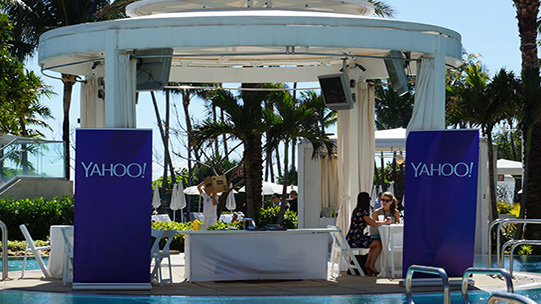 Nine… venture out to Yahoo Island, only accessible by bridge, where you will discover that Yahoo is currently looking for comedic scripted half hour shows (a full 30 minutes) as they join the bandwagon to produce original series material. Hint hint. You don’t need a paddle. 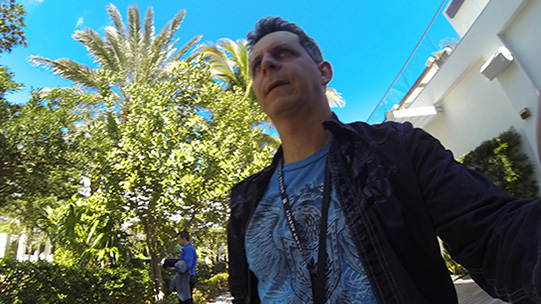 And, finally, Ten… bask in the lovely balmy weather, realizing that at the same time you are walking by a pool with people sunbathing on your way to your next meeting, it is currently -25 degrees in International Falls, Minnesota, and below 9 degrees with a chill factor of -2 degrees in Washington.
In your hypothermic face, D.C.! 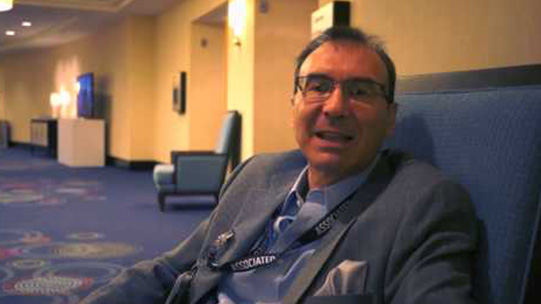 Want to hear directly from a Hit Maker Tour member what it’s like to be at Realscreen Summit? Hey, you’re in luck. Here’s HMT member Jonathan Chambers (Whirlwind) talking about his experience, about who he and his partner Elizabet Bergeron pitched to, and what YOU can expect if you go to one of these conferences. 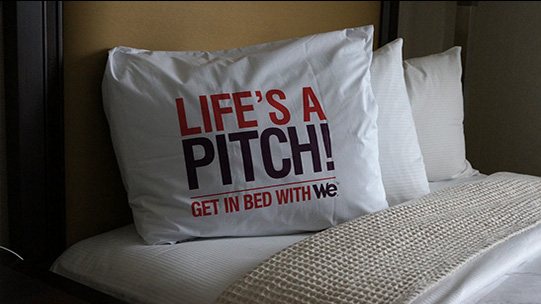 Good night and sweet dreams of success, everyone!

And thanks again for another marvelous Hit Maker Tour year to NATPE and Realscreen Summit!