Our March Madness is catching up with our lives after having just mentored another amazing group of Hit Maker Tour clients to Kidscreen Summit 2015.

And we’d just like to take this moment to thank whomever decided to move the Kidscreen Summit television conference in late February from New York City to Miami this year. We love the Big Apple, but as brutal as this winter has been up north, we’re delighted with the Big Orange. And so were our client show creators who joined us in the sunshine. Let’s get to the juice. 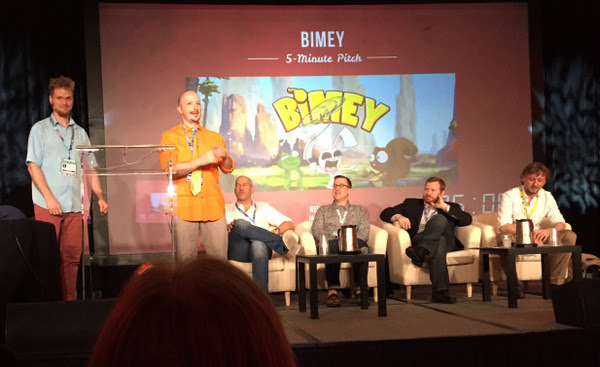 Chalk up another major television conference pitch contest win for one of our clients: Ian Johnston (above, orange shirt) just won the Big Pitch contest at Kidscreen Summit with his pitch for his animated series, Bimey.

Ian was actually a bit reluctant to tackle the pitch himself at first, but his natural improv skills and abundant energy proved the perfect combination to win over the judges and the standing-room only audience. He followed many of our pitch guidelines to the ‘T,’ responding attentively to the judges’ comments and noting their body language; staying flexible and adjusting his show description on the fly; keeping his confidence level up, and most of all, having a good time and staying funny. When you’re pitching a fun show for kids; that’s what it’s all about!

A big bonus for Ian and his partner Kehoe Floyd (in blue shirt) was all the positive attention the pitch win brought to their animation studio, Too Many Legs Studios. Besides showcasing their new series, they’re bound to pick up some work from several of the industry people who came up to them after the pitch to find out more about their ideas, their studio, and their work. 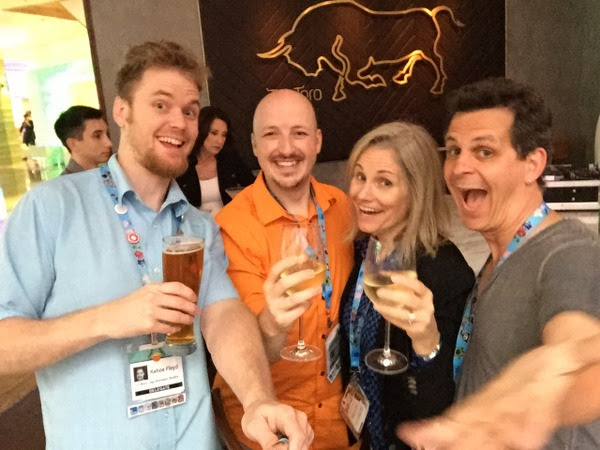 Here’s a toast to Ian and Kehoe.

And if you are interested in getting some of the key tips we passed to Ian about pitching, don’t forget we’re hosting a TV Pitch Bootcamp at The NAB Show next month in Las Vegas. Details on how to sign up right HERE.

Come aboard and we could be toasting your big pitch win and potential show sale at the next major conference! 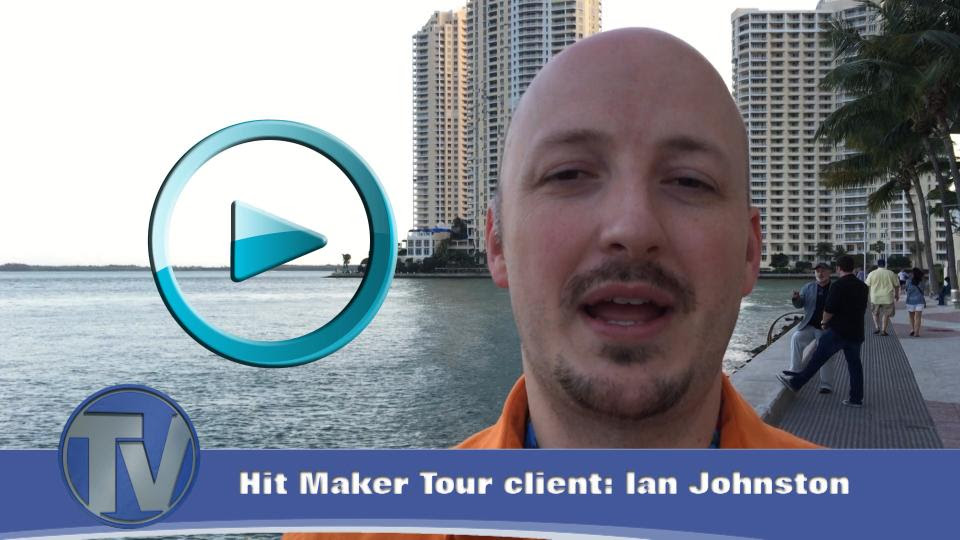 Here’s a brief testimonial from Ian about working with us. Click on the image to take you to the YouTube link. 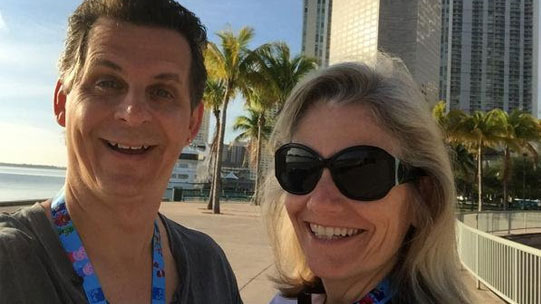 You can tell by the smiles on our faces that we’re happy not to be in New York City during a February blizzard. Sunny skies, warm balmy breezes and the hot action were all in Miami Beach this year as the Kidscreen Summit made its welcome debut in the sunshine state.

And it looks like they’ll be coming back for the next two years, as well, so make your plans for 2016. 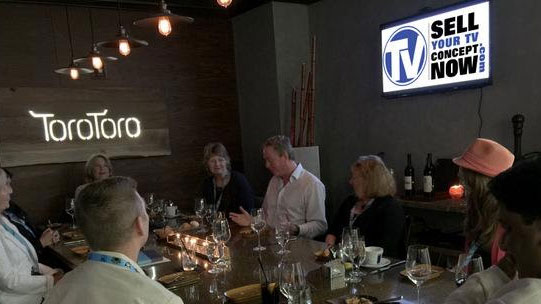 Our Closed Door session exclusive for our Tour members before the official opening of Kidscreen was at the ToroToro steak house. 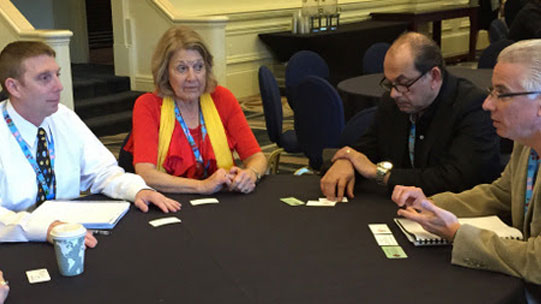 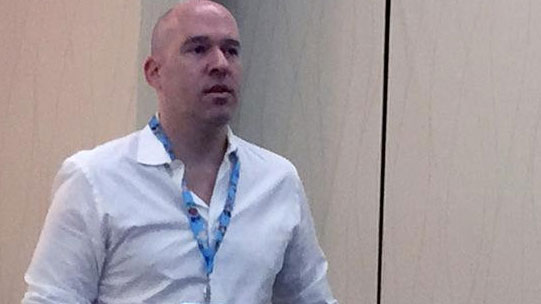 Dreamworks Animation Television executive producer Peter Gal gave an intimate talk where he revealed there has never been a better time to be an independent TV producer creating content. With so many outlets now available and willing to try new things, he added, your ideas and your voices are ripe to be looked at and listened to more than ever. 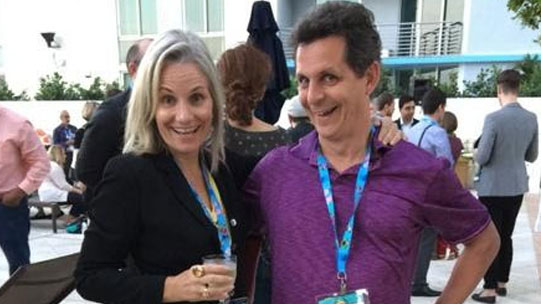 Speaking of being heard and being heard loudly, what would a major television conference be without Mark’s pants shouting out, “Lood at Me!” The attention-getting technique has been so successful that Jeanne is now joining in the act and wearing her own loud pants.
If this trend continues to spread, in a few years you may have to wear a conservative button down Brooks Brothers shirt and khaki pants to stand out in a crowd at the conferences. But, until then, these pants will slap your eyeballs and shout, “I’m talkin’ here!” 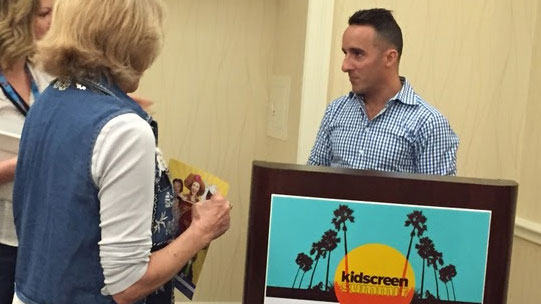 Tour member Lee Drescher (blue vest) had a few precious moments with Disney Channel’s SVP of Programming Strategy, Paul DeBenedittis (at podium), after his 30 Minutes With speaking presentation. You have to be quick on the draw in these situations, so notice how she’s got her One-Sheet primed to fire. 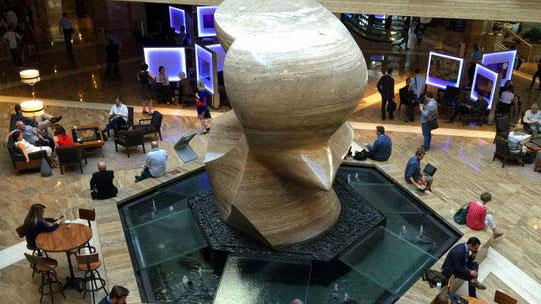 The InterContinental Miami was a great location central to downtown Miami or zipping across the causeway to South Beach for the jet set scene. Here’s a shot looking down on the lobby, right, and the lounge (below). And below right is the view out our window. 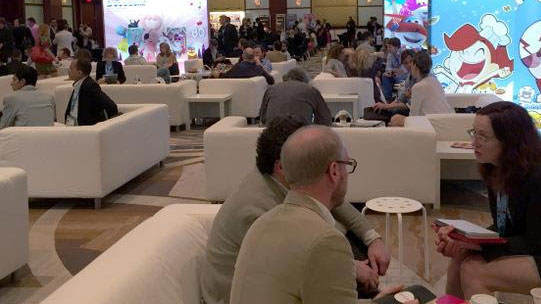 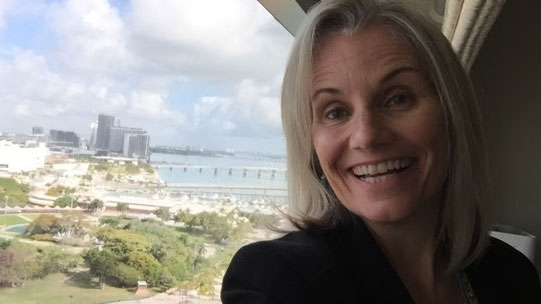 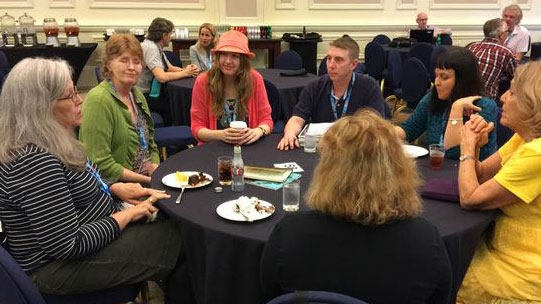 Tour members meet with Marge Dean (far left), Director of Production for Mattel’s Playground Productions. She revealed the types of projects Mattel is looking for and what they have in production. 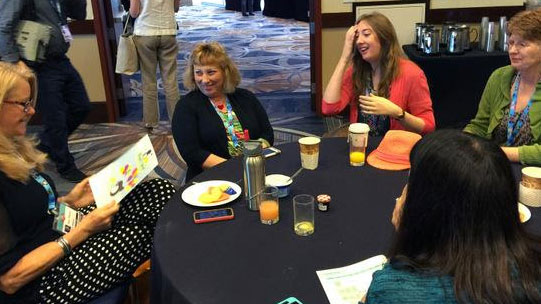 they meet with Jean Thoren (far left), Publisher and President of Animation Magazine. She’s holding one of their One-Sheets. 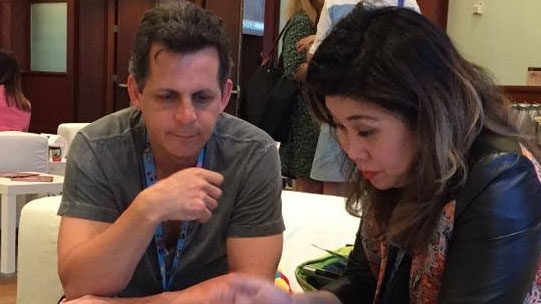 Mark took some time during the conference to work with executive producer Janet Roberts on a pre-school animated project called Bodhi World. 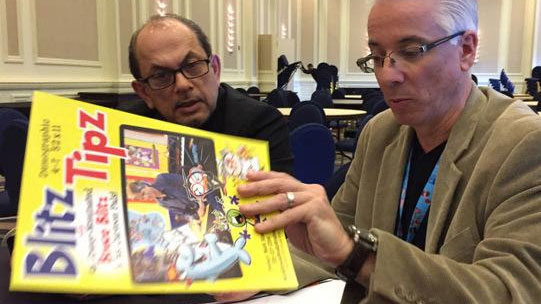 the two Breakthrough Entertainment execs looking at some of Mark’s pitch materials. 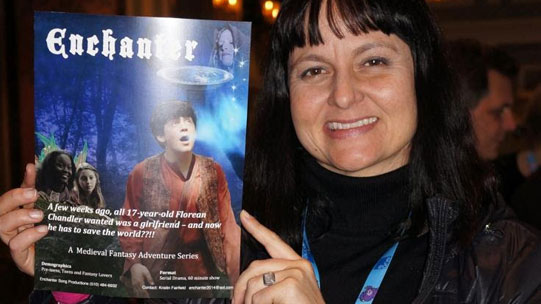 Kristin Fairfield (pictured right at last year’s conference) was at her second consecutive Kidscreen Summit as a Tour member pitching her show, and the second time proved a charm.
The creativity and professionalism she brought to her project caught the attention of production company Assorted Nuts, which signed a development contract with her to work on a concept they are going to take to Netflix. Way to score, Kristin! 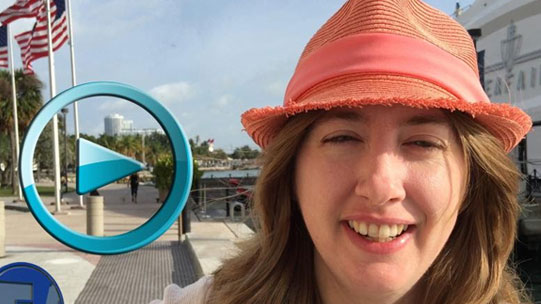 Finally, here’s a brief rave from Tour member Monica Bruenjes about her experience at this year’s conference. Again, just click on the image to take you to the YouTube link. And make it a plan and a pledge to join us next year in Miami!

Answer three questions to evaluate whether you’re ready to pitch a TV show:

If you answered “Yes” to any of these questions, your pitch is likely on the road to failure.

The professional pitch game is not as easy, or as scary, or as rigid as you might imagine. Almost everything you think you know about pitching a show… is wrong.

And anyone who tells you there’s one specific formula for guaranteed success is misleading you.

But there ARE definite Do’s and Don’ts that will better align you with the professional expectations and desires of the execs, so your pitch will be taken seriously and well above others.

Our Pitch TV Bootcamp in Las Vegas this April during NAB Show is the place to nail down all the insider information to eliminate misconceptions and missteps and get your idea on track for the best reception possible.

Don’t be taken for an amateur.

Don’t fail the next pitch challenge… when it REALLY counts.

Who Should Come to the Pitch TV Bootcamp?

Everything You Need to Know

“YES! I want to find out how to pitch my show
like a pro and how to get
face-to-face meetings with decision makers!”

AND THE AWARD GOES TO… 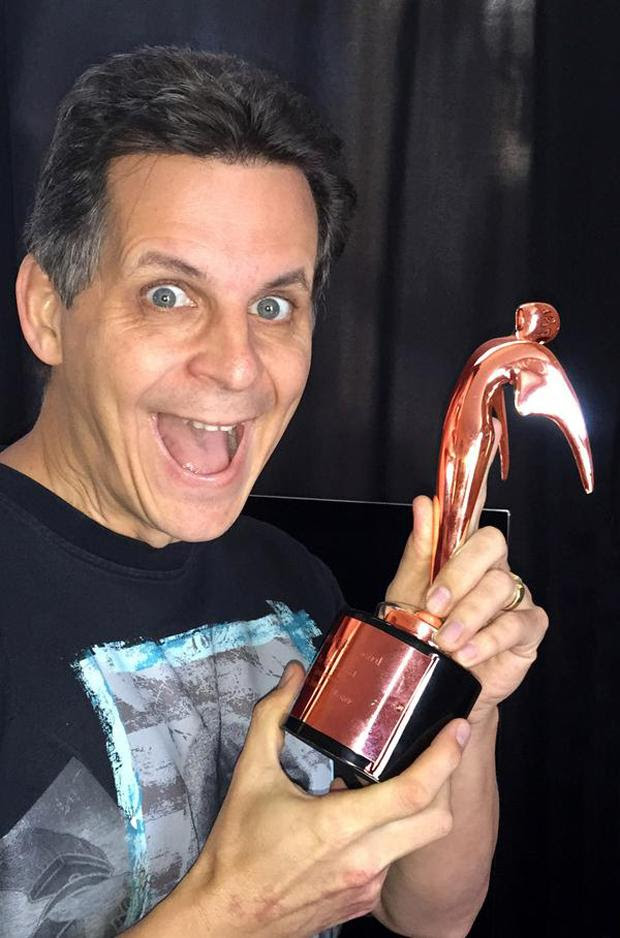 The Oscars are finally over, but that doesn’t mean the award season is finished. Mark just won a 2015 Telly Award for his direction and work on the Toon Boom Animation Showpiece, The Key.

The Key combines 2D and 3D elements and effects and was designed to showcase Toon Boom’s animation software. Willie Castro collaborated with Mark on character design, and Humza Kahn did the concept painting. The story revolves around a tussle between a young man and his grandfather for who gets to take the family hot rod out for a night on the town. More than 12,000 entries competed for various Telly Awards, which recognize outstanding
commercials, videos and films.

Mark explained that he was given a set of parameters for the short by Toon Boom to show off their capabilities, but took those guidelines as a mere starting point to push the concept further. “I wasn’t interested in directing scenes that didn’t mean anything,” Mark says, “so I wrote a story that incorporated all that and more. It was a fun challenge.”

YES! We do have Hit Maker Tours to Realscreen West and Banff World Media Festival. If you want face-to-face meetings with top network execs like you read about in this newsletter and you want to pitch with confidence check out our
Pitch Perfect Program + Hit Maker Tour Package.