Here’s an email we received from a client who managed to further warm our hearts despite the already 90 degree June heat in Orlando.

To refresh your memory, I met Mark at NATPE in Miami while trying to pitch my shows.

Well, I have to tell you guys that having come across you has been a blessing to me. I am yet to make my first sale, and let me tell you that I am well on my path, but you have given me a clear direction to move in.

Thanks very much for your awesome home study course, your generous seminars and for the kind thought behind your business model. Your work is motivated by kindness and love and that’s proven to be vital for me in planning my own business. I wish you tons of success and fame and all the good stuff you wish for yourselves and for your lovely family!

Thanks, Richa! We wish you the same and look forward to your success!


IN PRODUCTION with MARK & JEANNE

Our Hit Maker Tour to Realscreen West is in full swing with clients having an awesome crash course experience pitching reality shows at a major conference with mentor and Emmy-winning Deadliest Catch producer Doug Stanley on deck with them. We’ve got more of these fantastic opportunities to attend conferences with major industry mentors in the works, so stay tuned. 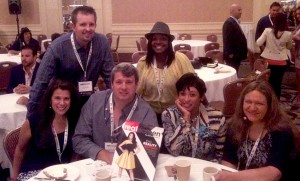 Jeanne is finalizing the 1-sheet on client Jesse Cole’s hospital-from-hell TV drama, Critical Condition. The script by Wayne Carter and Jesse is in peak condition, and Jesse will be getting his feet wet pitching and networking at the upcoming Pitchcon in Hollywood this month. We wish him the best of luck, but are confident he has the best of materials to get started, and a great conference mentor in Deadliest Catch producer Doug Stanley.

Mark, Jeanne and Wayne are developing a treatment and half-hour TV pilot script for Dr. J, aka Paul Jacobson, M.D., about his crazy life as a child psychiatrist on a mad quest to fill every day with as many endorphin-producing experiences as possible. By the sheer volume of the things he tries, some are bound to go disastrously wrong. These disasters are bad for him (or rather his character), but great for television entertainment. 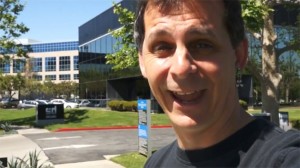 Finally, here are some video clips Mark prepared from his recent pitch trip to Los Angeles. Follow Mark as he has meetings at Disney, Nickelodeon, DreamWorks and others:

The SUMMER CONFERENCES are upon us.

The Great American PitchFest and Pitchcon… are both happening this month!

These conferences are golden (state) opportunities to network, make contacts, test drive your pitch, see what’s selling and what isn’t, and get a lead on who the players are at the networks (628 channels!) and production companies looking for material.

But any serious show creator needs to make sure they have their show and their pitch in top pro marketing mode before going.

If you’re not prepared, you may not get a second chance with the contacts you make.

If you have the goods and are confident, you will not only make a good impression, you will open doors you never thought possible.

1-On-1 Breakthrough Sessions with Mark and Jeanne are about turning your pitch into a magic formula that opens those doors.

These one-hour mentoring sessions take your ‘Maybe it’s okay’ idea and shape it into a ‘You won’t believe what I’ve got’ solid, confident, irresistible pitch.

These sessions are THAT effective. And it’s a minor investment in the big picture to tap this expertise and use it to pump up your show. 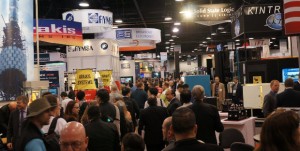 Here’s an excerpt from Mark’s recent article on the Animation World Network website.

Is NAB for TV Creators?

NAB, the National Association of Broadcasters, recently had their giant and leg-numbing conference in Vegas. There were over 92,000 people at the 2012 event. Their byline is “Where Content Comes to Life”. I went to see if it really is a place for content creators.

No, it’s not a place to present or pitch your concepts. No, you’re not likely to make contacts that will help your show (with an exception I’ll talk about in a minute). Yes, there’s a lot to cool stuff for creators who produce cool content. Yes, there are some (but not enough) content talks.

I was told that content was growing at the show and they even have an area called the Content Theater. Not exactly what I thought it would be. The Content Theater is a small free-standing enclosure where they had talks with industry executives. Some speakers were interesting, like Gerhard Zeiler, CEO of the giant RTL Group of stations in Germany, but the questions were pretty dry, so not a lot of interesting tidbits were picked up.

The opening session featured the hot Teri Hatcher from Desperate Housewives, but again, not much creative content discussion.

One press event I went to was relevant to independent creators, but not in an obvious way. Limelight Networks, which sets up online video streaming solutions, talked about their systems. Fine. Not very interesting. But, they also brought in George Gomez, the web director for cesarsway.com, the website for Dog Whisperer star Cesar Millan.

The Dog Whisperer is a popular series on National Geographic, but the website is owned by Cesar Millan. This is important for creators to understand. Cesar built his own site to build his brand using the success of the show. If his only presence was on the National Geographic site, it would end shortly after they stopped producing new episodes. This way, he has control over the longevity of his brand.

I promised a story about how one creator at NAB was able to use contacts he made there to help him with his show. Doug Stanley, CEO and reality king of Ridgeline Entertainment (and Emmy winner as producer of Discovery’s Deadliest Catch), was at NAB meeting with potential sponsors for his latest deep sea adventure series, The Longest Swim. Doug and his team were meeting not only with satellite and broadcast providers, but with equipment manufacturers of all types.

The Longest Swim is no ordinary show. It follows Ben LeComte as he swims from Japan to San Francisco. That’s right. He’ll swim from Asia to the United States; 5,500 miles. (He’s already swum the Atlantic ocean.). Production will need boats, satellites, water-proof gear, underwater equipment and more. It will be a 6 month high seas adventure and it will be broadcast live on Facebook. Check out the show on Facebook at http://www.facebook.com/TheLongestSwim.

NAB was a perfect place for Doug to meet everyone he needed to, and to check out all the gear he will need in one place. With a high-profile and demanding deep sea adventure like this, he needs lots of production support. Doug said the response at the show for his concept was amazing.

So is it worth the trip for creators? Yes, if you want to check out lots of equipment in one place. No, if you think it will help you sell your show.

See the entire article, including a more detailed and technical account at… http://www.awn.com/articles/television/mind-your-business-nab-tv-creators

This article also resulted in the execs from NAB contacting Mark and asking him to consult with them on how to make the event better for TV creators! Now THAT’S a great response!

The answer is yes and no, depending on what you want or expect.

Mark and Jeanne are enjoying VEEP on HBO. Not just because they’re friends with executive producer Chris Godsick (Jeanne attended college along with his wife, Lisa), but because of Julia Louis-Drefus playing the Vice President. “She is unapologetically self-absorbed and hilarious,” Jeanne explains. “All of the side characters are clearly delineated and stand out, which is not an easy thing to do,” Mark adds.

Fashion Star has also been a welcome surprise with a fantastic finale. The show stayed focused entirely on the talent of the contestants instead of manufactured drama, and you had real stores buying the contestant’s designs and making them available the same night as they were featured. Unique.

Howard Stern on this season’s edition of America’s Got Talent has also breathed new life (and he’s got the schnoze for it) into the show, upstaging Howie Mandel at almost every turn. Even on-stage host Nick Cannon seems more energized and engaged. And Jeanne points out the editors are also big stars for this show considering how much they must put together in post.

Wayne and Danette are spending some couch time with Interior Therapy on Bravo. Reality star Jeff Lewis (Flipping Out) has morphed a series that was originally about remodeling and ‘flipping’ houses for a profit into a series about redesigning an interior space for a celebrity or client. The interaction and confrontation of their client’s ‘issues’ become part of the re-design process. People hang on to stuff for a reason, even to the point of cluttering their living space beyond any aesthetic appeal, so it’s a hoot to see this often abrasive character waltz in and immediately start insulting and purging all the stuff they were so attached to, and creating conflict and comic moments.

A contract Mark recently received stated he was to provide the hiring company with an invoice for the amount they owe every quarter before they will pay. But only they know how much they should be paying because the contract clearly states the fee is based on download and percentage of streaming. They missed that detail and are now fixing their contracts.

They sent the same contract to dozens of other clients providing animation services. No one else noticed.

The devil is in the details. Take nothing for granted. You don’t need to be a lawyer to understand contracts. Just read them and see if you agree.

Mark is the rare bird who reads every line in a contract, which is one way he avoids legal problems or feelings of being cheated. He knows what he signs when he signs it, and he won’t sign anything he doesn’t agree with. Sure, it can be a boring slog to go through, but a boring read is better than going through a costly and stressful lawsuit.

There’s a great episode of South Park where Stan agrees to a contract without reading it. It allows his mouth to be sewn to someone’s butt, just like the movie about the Human Centipede. Is there any better way of showing how important it is to read contracts, and how humiliating and hideous the consequences can be if you don’t?

Check out the episode online at http://www.southparkstudios.com/full-episodes/s15e01-humancentipad

And read your contract. Every coma-inducing line.

WHERE ARE MARK & JEANNE? 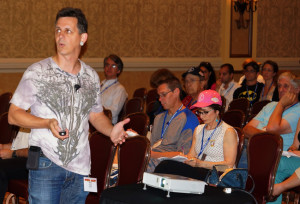 Mark just returned from the National Cartoonist Society Reubens Weekend in Las Vegas, where his gave a talk and hung out with many of his cartoonist heroes, including Jim Davis (Garfield), Mike Peters (Mother Goose & Grimm), Mel Lazarus (Miss Peach), and all the artists from MAD Magazine (Jack Davis, Al Jaffee, Sergio Aragones, Tom Richmond, etc.).

During his ‘animated’ talk, “How I Got Over $2 Million in Free Advertising,” Mark jumped on the furniture, roamed through the audience, and made fun of fellow cartoonists.

National Cartoonists Society Seminar Coordinator Jerry Van Amerongen emailed a review back to Mark that read, “A huge thank you for presenting such an informative and entertaining seminar. I got so many positive comments from so many people. Thanks for your time and talent!”

Here’s a link to some key notes from Mark’s talk:
http://dailycartoonist.com/index.php/2012/05/26/reuben-award-weekend-notes-mark-simon/ 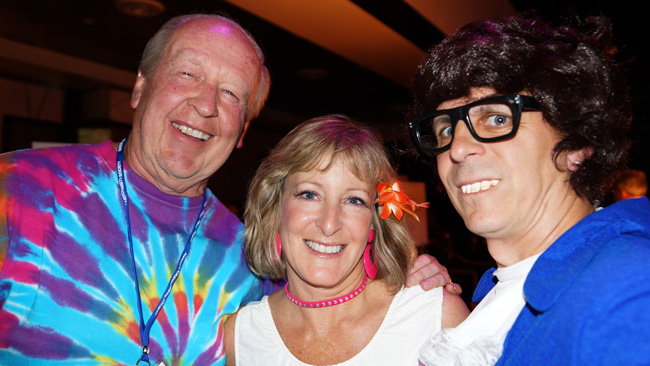