Aaarrrrg! (Your Pirate spelling may vary) 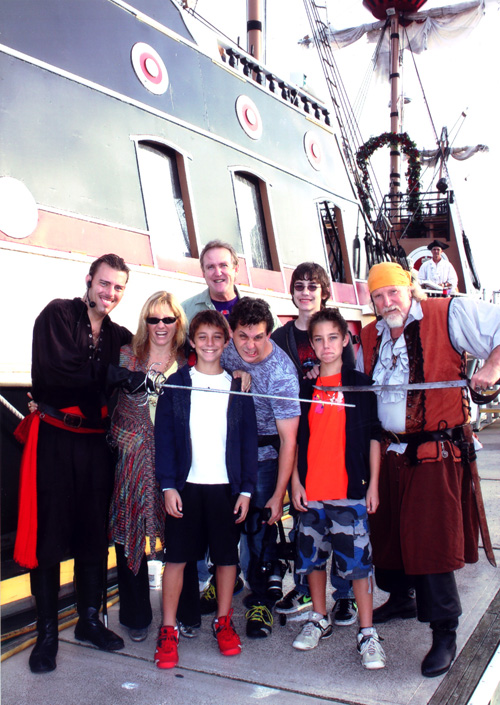 Is it a Pirate’s life for you in 2012? It could be a treasure chest for our clients Gunnar Hedqwist and his organization. They run a pirate cruise experience out of St. Augustine, Florida, using a full-size replica Spanish Galleon Pirate Ship and a crew and cast of colorful characters. It’s called the Pirate Black Raven Ship.

And now, working with Mark and Jeanne, Hedqwist and his cast are turning the day-to-day experience into a masterful pitch, treatment and potential reality series for television called Mutiny On the Black Raven. The tableaux of the backstage life of the cast and crew mixed with the vast assortment of tourists and clients who walk the decks offers a hearty brew of potential moods and storylines: Weddings; corporate bashes, bachelor parties; class reunions, sorority pledges. Each event would bring its own set of characters, agendas, triumphs and pitfalls. Just add a barrel of rum and the potential misadventures of this crew could make Jersey Shore look like … a day at the beach.

Our timbers shiver with anticipation of the bounty this Blackbeard brood could hoist aboard this year once their pitch and treatment are ready to launch.

Everyone’s still recovering from holiday shopping and eating, but a couple projects are rolling in the deep of 2012. 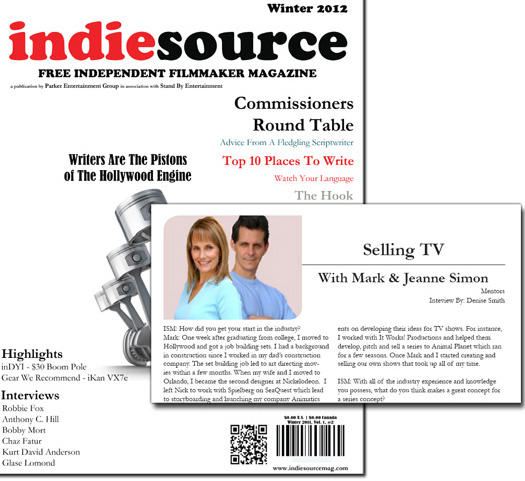 Jeanne’s developing a treatment for a project called Fortune Teller; a live action fantasy series based on a unique set of Tarot cards, and the characters depicted there.

Wayne’s wrapping up a script polish for client Ryan Magnon’s half-hour comedy animation pilot, Totally Awesome Dude. He was able to cut 10 pages from the 44 page script, bringing it down to a format acceptable half-hour length without sacrificing any of Ryan’s key story points or unique humor.

Reece, Luke, Jeanne and Gracie had acting roles in a regional video promoting safe walking and biking to school instead taking the bus. Protect the Journeywill debut early in 2012 on websites and DVD throughout Central Florida to students, parents, teachers, school districts and policy makers. We’ll post a link when it’s available. Luke and Reece play kids walking to school (with Mom and Gracie their dog) in the early, Hallmark-style intro to the documentary-style video.

January brings a new year and some new excitement for a select group of show creators making the Hit Maker Tour to Realscreen in Washington, D.C.

The Hit Maker Tour to the Realscreen Summit in Washington in January has SOLD OUT.

We’d again like to personally thank everyone who came aboard for making it another sell out. The next training session is coming up January 17th. This one will be a good dress rehearsal leading up to the event, so get ready to bring you’re ‘A’ game.

For those of you who are going to NATPE or the Kidscreen Summit instead of the Hit Maker Tour to Realscreen, you can still get expert material reviews for before the conferences. Mark or Jeanne will review your treatment, script, or one sheet and give you detailed notes on how to make it all professional, polished and pitch-ready.

I always love the end of the year list of the Best Of…, Biggest of…, etc of things and events of the year. But most movie lists get it wrong. They list the best reviewed movies or the ones that made the most money.

This is animation. I want to talk about the animated movies of 2011 that were the most FUN to watch.

1: Arthur Christmas
Incredible character designs and super funny script. I laughed hardest at this movie from beginning to end than any other animation this year. I’m stunned that more people aren’t talking about it. Completely under-rated. The Grandpa Santa is one of the greatest designs I’ve seen in years. Just looking at him is funny.

I think the title may have hurt it in the box office. It’s accurate, but not enticing. In other words the title sucks…but go see it. It’s the must-see film of the season.

2: The Adventures of Tintin
I was wary of this movie since all of the performance capture movies by Zemeckis have looked absolutely terrible. Every character had that horrible ‘dead eyes’ look. Luckily, Spielberg and Peter Jackson have conquered that problem with this movie. The characters look incredible.

This is truly an animated Spielberg movie. It’s an adventure like his Raidersmovies. It’s a blast.

I think the problem here, again, is the title. I’m a huge comic book fan and have known about Tin Tin for decades, but I never read it. The name turned me off, and it looked like I’m not the only one since this great movie is not making much money in the States. Here in the U.S. the name Tin Tin is reminiscent of the old TV series Rin Tin Tin, giving us a skewed feeling of what the property really is. Forget the name but don’t miss the movie.

3: Kung Fu Panda 2
I love these characters. Jack Black’s live-action movies are tanking, but his VO on animated films is great. The 3D stereography was the most comfortable I’ve seen (with the exception of Avatar). Fun and funny with lots of outrageous action.

4: The Illusionist
Everyone talks about the first part of Up being so great because the story was told with no dialogue. Well here’s an entire movie with no dialogue. It’s slow-paced, but it’s a great pace for this type of story. Great look and keeps you interested from the first frame to the last.

5: Paul
I put Paul in the list because the lead character is animated. I’ve seen this twice and loved it each time. Great character writing and design. A foul-mouthed, wisecracking alien is always good for laughs. One of the best comedies of the year.

For the next five (plus five that sucked), please see the entire article at …

Mark and Jeanne are getting their modern day fairy tale fix with the series Grimm on NBC Friday nights at 8 p.m. The series involves a descendant of the original Brothers Grimm in the present day who can see the true faces of original Grimm Fairy Tale villains and heroes that others cannot as he investigates crimes. Mark calls it a mix of Fringe, X-Files and Reaper; a surprisingly dark but enjoyable entry for the peacock network.

Wayne is catching up with the BBC series The Hour, which is a behind-the-scenes look at the people running a live newscast in 1956, when England hadtheir own war misadventure in the Middle East grasping to hold onto control of the Suez Canal. This series, which, in typical British fashion, runs only six episodes for a season (quality versus quantity across the pond), is like Mad Men meets Broadcast News meets a British spy novel. There’s a love triangle between the good looking male anchor, the super professional woman producer, and the brilliant journalist/writer. And the amount of daytime drinking and smoking would give Don Draper a serious hangover and hack.

And for anyone watching the finale of American Horror Story; good grief, what are they going to do for the second season when all the leads (except Jessica Lange) were killed? A new family moving into the Victorian overstuffed with old and new ghosts, we guess.

UPDATE: According to creator Ryan Murphy in an interview, it will indeed be a new family AND a new house. The show will completely reboot each season, so the only continuity in the show franchise is the title. Interesting approach. 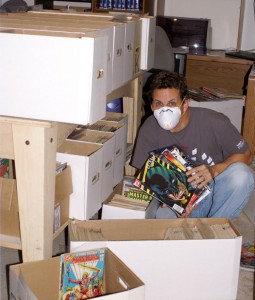 This isn’t just a blast from the past; this is about almost getting BURIED in the past… by more than 7,000 comic books. Mark took the holiday break opportunity to check in on his comic book collection from the 70s and 80s, including most titles in the Marvel and DC catalogs, and the mere opening of the closet door where they were stashed revealed a towering Jenga of massive comic boxes ready to topple.

potentially embarrassing headline of being crushed to death by your own comic book collection, Mark carefully started spreading the boxes up around the house to began cataloguing them to sell through an auction house. Sadly, Luke and Reece were not interested in the comics as heirlooms. Their loss.

Turns out, the investment was better than stocks have been over the past decade or so. Some of these comics, which originally cost 50 cents or less, now fetch auction prices of $1,000 or greater. There’s a potential Infiniti G37 in those auctioned titles. You might call them comics, but that’s no joke.

If Mark can just survive the aged paper or dust, he just might have the last laugh.

January 2, 2012 brings the launch of yet another major network channel hungry for programming, and this one from NBC, no less. The NBC Sports Network replaces Comcast’s Versus channel (think bullriding and cycling) with its own programming beginning at 4 p.m. on the 2nd.

Jon Miller, the president of programming for the network, explains they will be focusing on three types of programming: live events and live games; original news, talk and conversation; and original programming, which will include sports-oriented shows.

The network will also provide a lot of ancillary programming around events covered by the parent company such as the Tour de France and the Olympics. But here’s another opportunity for anyone with a sports-oriented show to pitch to a channel hungry for some programming.

For a good overview of all the new shows debuting on television in the next month or so, check out this New York Times article listing the shows, and the one line pitches that were probably used to help sell them. Check it out and get inspired to move forward with your own show, knowing how much better it could be than some of these:

American Stuffers, anyone? Here’s a show debuting on Animal Planet about people that have their favorite pet stuffed. If that doesn’t excite or repulse you, there’s always the 5th season of Jersey Shore on MTV, where, you watch human animals less evolved than your favorite pet stuff themselves with everything from tortellini to tequila.

And speaking of excessive drinking, we’ll be aboard the 20th anniversary special featuring the return of the Absolutely Fabulous girls airing January 8th on BBC America.

Where are Mark & Jeanne?

Home for the holidays. We hope you had a terrific one, and enjoy a healthy, fun, prosperous and eventful but non-apocalyptic 2012!