While historic blizzards were blasting the Northeast in January, our Hit Maker Tour members were blitzing two of the largest television conferences and pitching their shows at Realscreen Summit in Washington, D.C. and NATPE in sunny Miami Beach. Here’s a photo journey of many of the exciting events, people and opportunities our Tour members encountered. 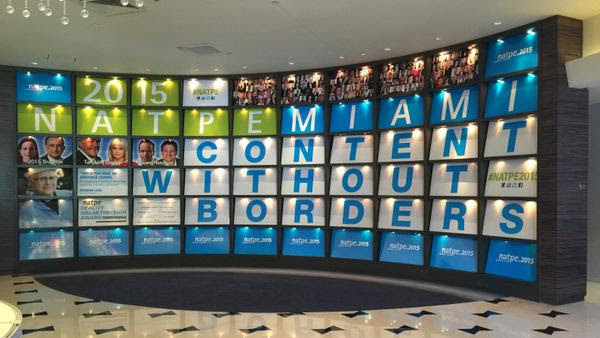 Mark and Jeanne at NATPE 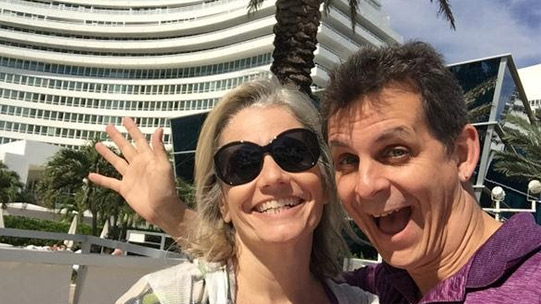 Greetings from Miami Beach and the Fontainbleau Resort, site of this year’s NATPE conference. Sure, the Northeast is buried under several feet of snow and enduring sub-zero temperatures, but hey, we almost had to wear a jacket one night, and during the day we had to watch our UV Exposure. 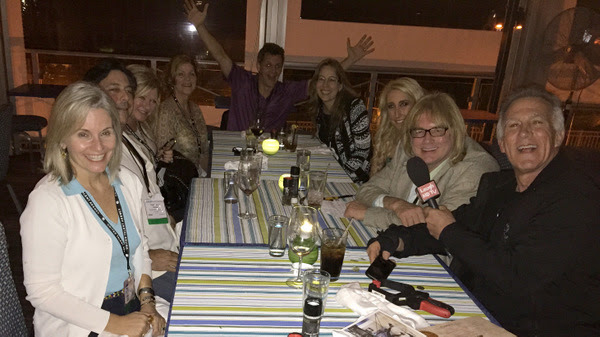 We had a great group of Hit Maker Tour members this year with projects ranging from one-hour scripted action adventure to reality medical shows to a heart-warming series about a farm woman’s bonding with a special cow.

Here’s the entire crew at a closed dinner session the night before the official conference start, and hopefully trying to respectfully refrain from ordering the beef. 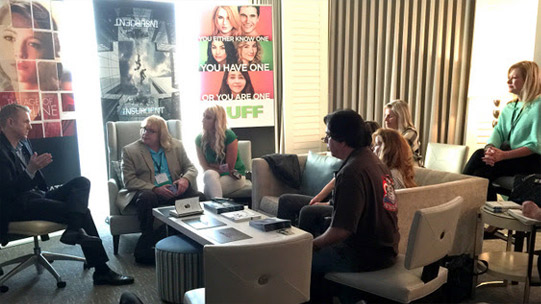 Let’s jump right to the big action, or the ‘Beggs’ action in this case. Here’s the group meeting with Kevin Beggs (left), the President of Lionsgate Entertainment, in their private suite.

Our Tour members heard exactly from the man-in-charge what Lionsgate is looking for and they were able to pitch their own shows. 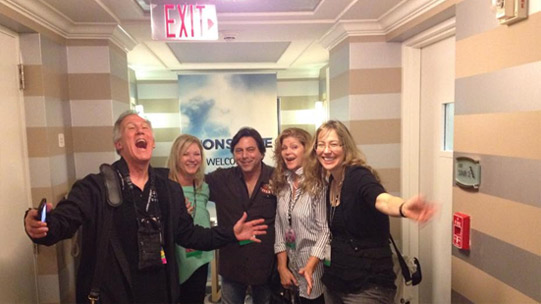 The group was pretty excited about this highest level meeting as evidenced by their enthusiasm here, just prior to entering the suite for the meeting. Lionsgate produces and distributing some of the biggest profile films and television series internationally. 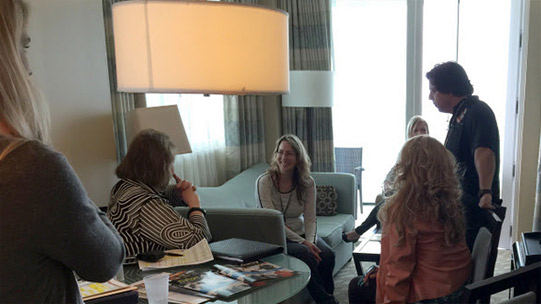 Another private suite meeting was with Meg LaVigne (seated behind table), president of Litton Syndication, which funds, produces and distributes shows. She was very responsive and spent a lot of time with our Tour members. 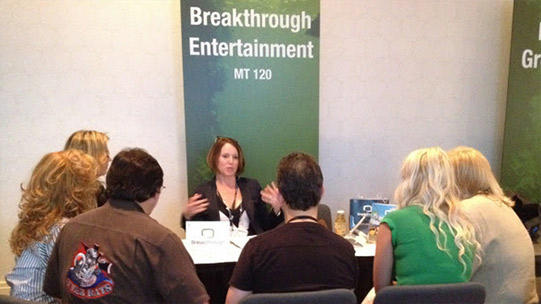 Jodie Mackie, center, is the Acquisitions Executive for Breakthrough Entertainment, which also produces, funds and distributes television programming. One of our Tour members made a deal with them last year on a tour, and this year they are very interested in member Dr. David Florence’s show, “Doc Star.”. 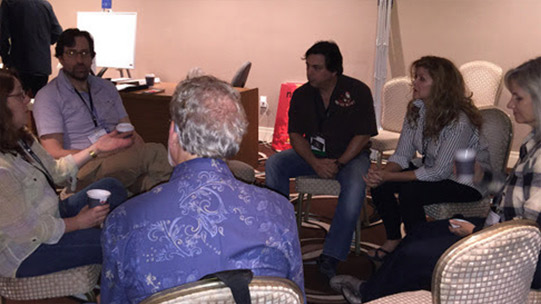 Here’s the group pitching their shows to an executive from truTV in an office that we shared with NATPE. This accommodation came in quite handy as a location for any private meetings a member wanted to schedule. 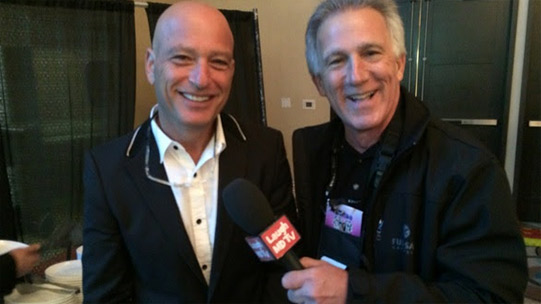 Celebrities were in abundance at the conference this year. Tour member Dr. J. (holding microphone), enthusiastically got his picture taken with every celebrity he could pounce on, tracking them down like a great hunter on safari. Howie Mandel was perfectly okay with being the bagged prey here. But please… no shaking hands. 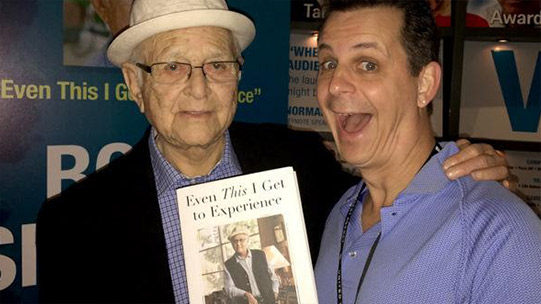 Mark’s big ‘get’ was his hero, legendary television producer Norman Lear. Not only did he get Lear to sign a copy of his book, he ended up hanging out with him a couple times at the snack shop. “Why are there no shows for older people?” Mark asked. 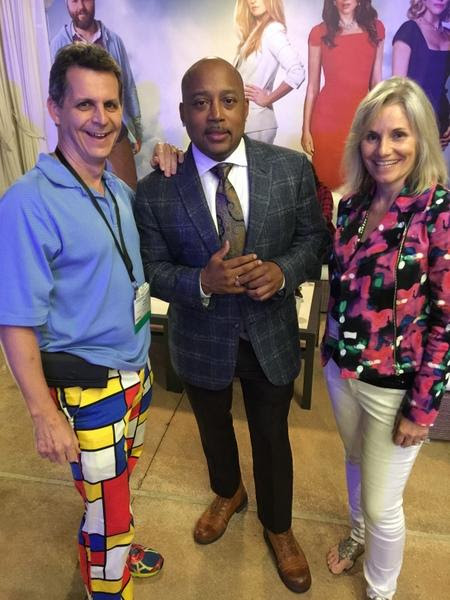 “Fashion Do or Don’t?” Jeanne quizzed him about Mark’s pants. For attracting attention, Daymond replied, “Definitely a fashion DO.” 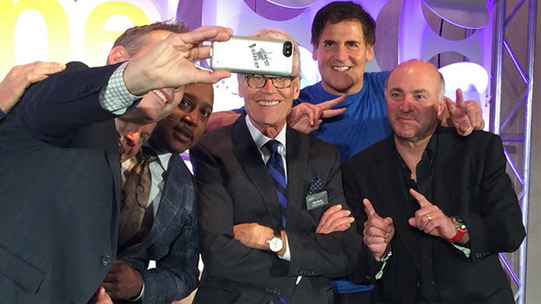 Mark Cuban and Kevin “Mr. Wonderful” O’Leary from Shark Tank were also on hand to take a selfie with NATPE president Rod Perth. 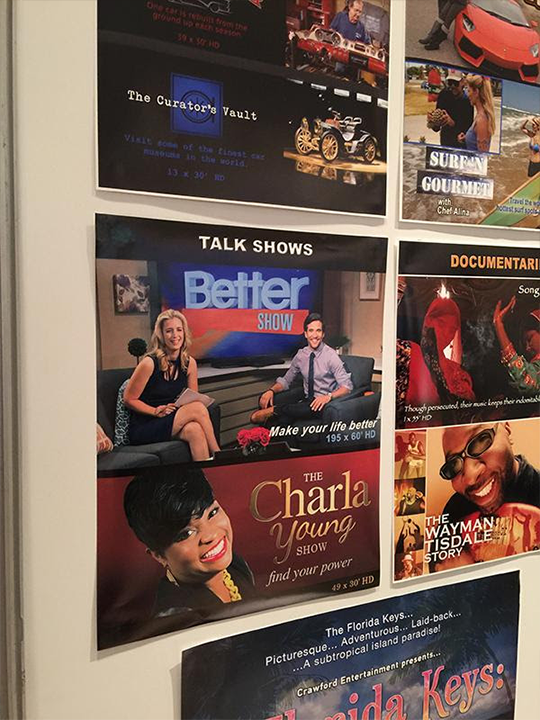 We couldn’t help noticing a poster at the TVS booth promoting “The Charla Young Show.”

Charla was a client of ours who also won the pitching contest at Pitchcon in Santa Monica a couple years ago. It’s always great to see great talent we’ve worked with and rooted for coming into their own. 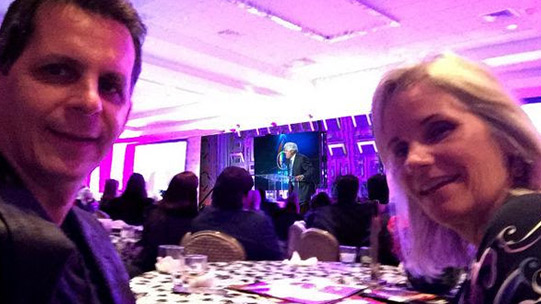 Jay Leno was on hand to present the Brandon Tartikoff Legacy Award. 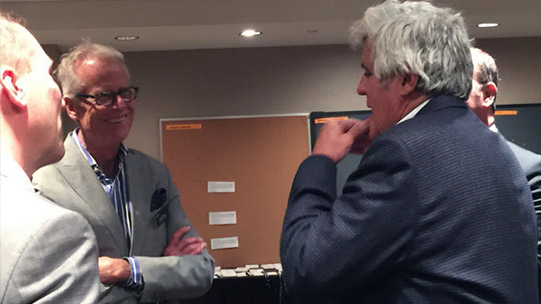 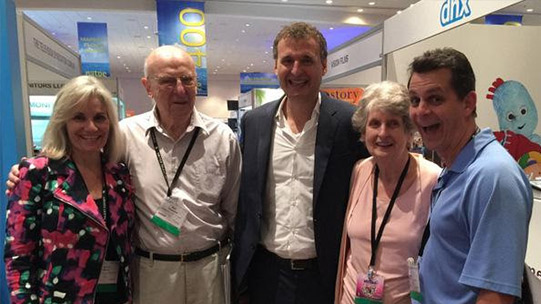 Phil Rosenthal was the creator and producer of the long-running TV series Everybody Loves Raymond, based on experiences in his own life, including with his parents, seen here. Mark walked up and just said he wanted a picture with Phil’s mother, which immediately got a laugh, and also a picture.

When Mark complimented Phil’s fascinating documentary about trying to launch a Russian version of Everyone Loves Raymond in Moscow, the mother quipped, “That’s the first intelligent thing anyone’s said to my son.” Now we understand where all those stories about the outspoken mom from the show come from. 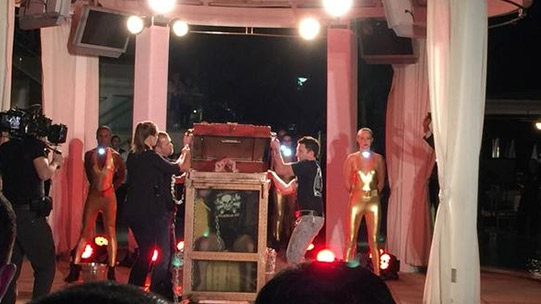 Our Tour members had a spectacular and productive experience, with many leads and bites to follow up on. But the conference did have one epic fail. This magician promoting and shooting footage for his show was attempting a water tank escape that went on forever and was so boring everyone was secretly hoping he would drown. 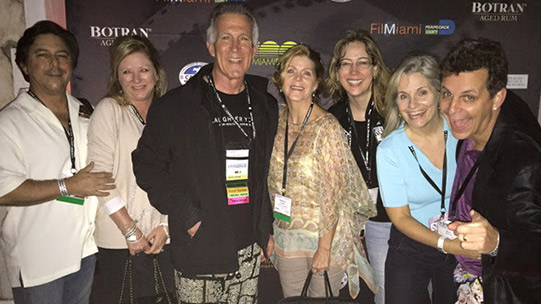 It was another great NATPE and we will continue to update you on the progress of all our Tour member shows, including one show that got multiple bites from several huge companies.

Watch for another Hit Maker Headlines this month for news from the frontlines at Reelscreen Summit.

We’ll Be Out West in April

WE, Jeanne and Mark Simon, are staging and hosting a half-day interactive “PITCH TV BOOTCAMP” at 2015 NAB SHOW to help you perfect your pitch. 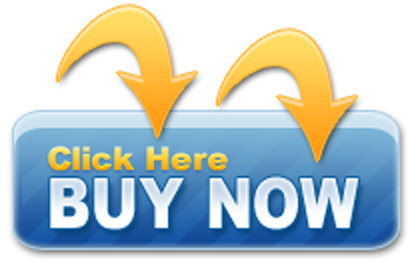 “YES! I want to find out how to pitch my show like a pro and how to get face-to-face meetings with decision makers!”

Make your purchase by Thursday, March 12th, Midnight PST and you get the EARLY BIRD BONUS!

This is INSIDER INFORMATION we’ve gathered directly from top executives from 14 major networks about:

Get the inside scoop on networks, such as… 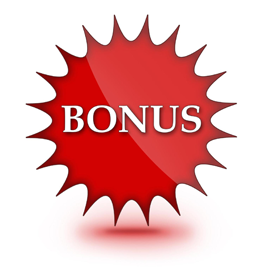 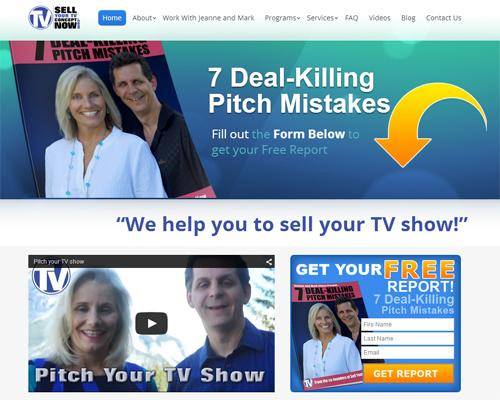 We’re so excited to share our new website with you. It was a year in the making and it was worth it! Now it’s easy to find all of the services we have to offer and there are lots of examples of our work like on the One Sheets page.

The URL is SellYourTvConceptNow.com. Let us know what you think!