And, if you haven’t visited it yet; don’t forget to check out our brand NEW WEBSITE, boldly re-designed, easier to navigate than ever, and JUST NOW lurching to life and going through its final launch stages. It is indeed ALIVE. Check it out now.

When it rains, it pours. But we love a good downpour.

Mark is currently directing a pilot based on the comic “Cyber Optics,” created by Kathy Messick.

Got an animation project to pitch, eh?

Then grab your Moosehead and scoot on up to Canada and the Ottawa International Animation Festival from September 21-25, 2011.

The Ottawa International Animation Festival (OIAF) is the largest of its kind in North America, attracting film buffs, art lovers, filmmakers, and cartoon fans from around the world..

Go to the official website at http://www.animationfestival.ca/index.php for more information.

Also, don’t forget MIPCOM is coming October 3-6, 2011. This is one of the more important industry gatherings for show creators. We’ve taken clients to this event year after year where they’ve scored dozens of vital industry contacts and information.

MIPCOM is the multi-billion dollar content market where deals get done face-to-face. With 12,279 participants and 1,700 exhibitors see what makes it unmissable. It’s the original social network for the entertainment community.

The most creative minds in the business can find new production opportunities with financing partners that turn dreams into realities.

Find out more at the official website here: http://www.mipworld.com/mipcom/

HIT MAKERS SUMMIT ON THE MOVE

Our fabulously popular Hit Makers Summit, usually scheduled for September, has been pushed back to early Spring while Mark is busy working on storyboard animatics for the Alcon Entertainment feature version of the Hanna-Barbera classic cartoon “Hong Kong Phooey” starring Eddie Murphy.

This experience, and working with director Alex Zamm, should offer even more great insights, insider information and valuable training from Mark when the Summit reconvenes early next year. Stay tuned for exact dates and schedules, but we will be taking early registrations soon because the event always sells out.

We’re hugging it out with the eighth and final season of “Entourage,” on HBO. Vince and the boys haven’t grown up much in eight years, but then that’s true to life for the real Hollywood experience. This won’t be the end of their adventures though, as a feature film is already in the works.

Mark also enjoys the guilty, undressed and blood-drenched soap opera pleasures of “True Blood” on HBO. If Hollywood is all about not growing up, Bon Temps, Louisiana is where everyone who IS grown up is either a vampire, fairy, werewolf, were-panther, witch, medium, or shapeshifter. There’s hardly anyone else left to be a victim. But, come to think of it, we know quite a few bloodsuckers in Hollywood, too.

Jeanne’s also catching up on HBO’s highly-praised series, “The Wire” on DVD, which presents a complex and unflinching look at the disintegration of inner city Baltimore through the eyes and lives of its drug dealers, cops, dockworkers, students, politicians and reporters.

She’s also reading the “Game of Thrones” books by George R. Martin after enjoying the first season adaptation of the medieval style fantasy series on HBO.

Wayne’s on board with all of those shows, and also is enjoying “The Green Room” on Showtime, where comic Paul Provenza hosts four other major stand up comics hanging out, drinking, smoking cigs, smoking weed (hey, it’s medically legal in California, and why do you think they call it the ‘green’ room?) and talking about the business in ways usually not open to those ‘outside’ the green room. A great concept, but we wish it were an hour show instead of a half hour. What did they leave out?

Wayne and his wife Danette also watch “The Big C” on Showtime, where Laura Linney plays a mother and wife who finds out she has terminal melanoma cancer and begins radically changing the way she lives her life and her outlook. A bit too sit-com of an approach for the premise – it can get plain silly – but it’s stacked with grade A New York stage actors who deliver great performances.

Keep up the great work, HBO and Showtime and we’ll be with you both for “Boardwalk Empire” and “Dexter” in the fall. 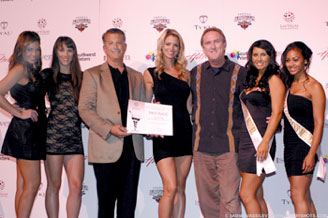 Client RICK BRANDELLI is having the ride of a lifetime collecting awards for his new TV Pilot drama script “Sunset Fire,” written with SYTVCN writer, Wayne Carter. Besides additional awards in EIGHT international film festivals, the script just won FIRST PLACE at the Las Vegas Film Festival. And Rick and Wayne were both on hand to accept the award, participate in the writer’s panel session, and celebrate the victory in true Las Vegas spirit.

We’ll keep you updated as the HEAT continues to rise on “Sunset Fire.”

Have you heard someone in the entertainment industry use the term “socialize” as a verb when it comes to reviewing or giving you feedback on your pitch or project?

We just had a Disney executive say he wanted to “socialize” our animation short before getting back to us. Frankly, we hadn’t heard that one before and speculated all sorts of uses of various forms of social media, including Facebook, Twitter, or whatever.

But it simply means he wanted to show the rest of the people in his department and ‘see what everyone else thinks.’ He wants to get some kind of consensus from his workplace social environment.

Okay, we get it now. So next time you need to give a decision to someone, don’t be afraid to say you want to ‘socialize’ it first. You’ll be in good company.

Another term we’re hearing is “Getting the Full 360.” This usually means a management agency or other entity who wants to represent you who will cover all your needs beyond just being a manager. They might also get you publicity, provide legal services or advice, field offers, negotiate, book appearances, etc. But can they do your laundry and walk your dog and get you quietly in and out of rehab? Now THAT’S service.

GETTING MORE KICK OUT OF YOUR PITCH

The approach I use to compete in forms at a Tae Kwon Do competition is the same approach I use when I pitch a TV show: I tell a story. The moment they call my name, I’m in character. I make sure everyone in the facility knows I’m in the ring. I don’t just speak loudly, I make a pronouncement.

“It’s GLORIOUS day to compete, Grandmaster,” I boldly claim to the center judge of the five judges. When I go through my forms, I am not just going through the motions; I am actually recreating a specific fight in my mind, both visually and emotionally. 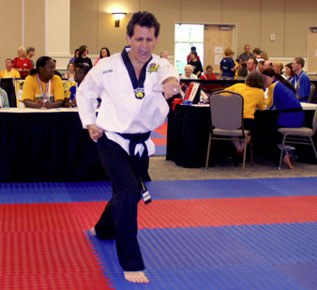 In a TKD competition the audience experiences the fight like the story of the fight I am playing out in my mind. I don’t have to think about it because I have trained so much and gone over the routine so many times in my head beforehand, it’s just a second nature to me once the competition begins.

In pitches I have developed the show so much and gone over every detail so meticulously that when the time for a pitch comes, I know it inside and out and can respond instantly to every question about it, just like blocking an attack move with the perfectly visualized defense.

I teach my TKD students how to tell a story with their forms just like I teach our clients how to pitch with a story (but with less hitting and kicking, of course). The amount of discipline and energy is the same.

Remember what the club scene in the 80s was like? If not, maybe this clip from a movie Mark was the production designer will boost your memory, and maybe your hair at the same time. 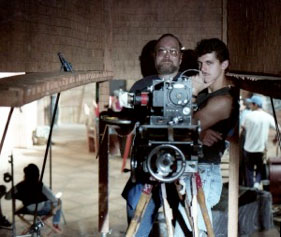 Mark Wolf worked together in 1986 on a low-budget feature called “Slave Girls from Beyond Infinity.” What? You haven’t heard of it? It’s a classic! This was done at the notoriously tight-budgeted Roger Corman studios. We did everything on that movie from miniatures, to front screen projection, rear screen work, foreground miniatures, beam splitters, and so on.

Wolf was the FX producer and I was the art director and construction foreman. That’s Wolf on the left and me on the right. We’re standing inside a foreground miniature which lined up in-camera to the set in the distance. We didn’t have digital compositing back then, so we did as many effects in the camera as we could.